The Christian Doppler Laboratory for Model-Integrated Smart Production investigates the usage of modelling for engineering intelligent production facilities as well as the development of modelling languages which are able to deal with operational production information collected at runtime. In this context, we also explore the state of the art, current developments, and application of Systems Modeling Language (SysML). This OMG standard has been on the market for about thirteen years.

SysML is an extended subset of UML providing a graphical modeling language for designing complex systems by considering software as well as hardware. By conducting a systematic mapping study about SysML we aimed for

There is a growing scientific interest in SysML in the last years particularly in the research field of Software Engineering. Click To Tweet

Thirteen Years of SysML: A Systematic Mapping Study from swolny

Our systematic mapping study process is based on the guidelines introduced in Petersen et al. [1] and consists of five steps (see Figure 1). 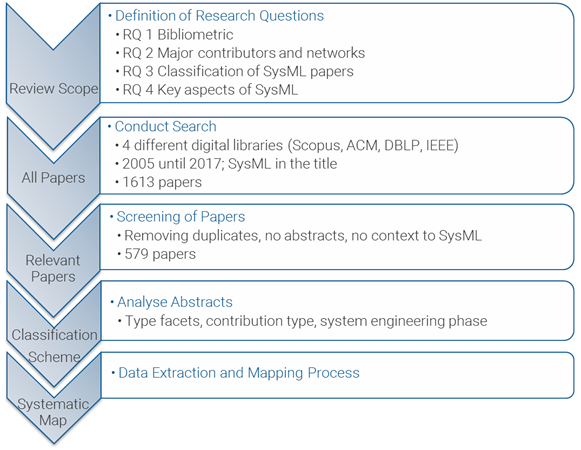 We used the following keywords for our search:

As digital libraries the following ones utilized:

In the following, we present some of our key results (cf. our paper for all the synthesized results of our literature study). For shortly introduce the research questions and immediately provide an answer based on our main findings.

Table 1: Most prominent conferences (at least 8 papers) and journals (at least 4 papers) regarding the number of publications between 2005 and 2017

The publications in our result set were published in 316 different venues. Table 1 lists 12 different venues: conferences with at least 8 SysML publications and journals with at least 4 publications. Figure 3 shows the distribution curve across all these publications in the time frame from 2005 to 2017 regarding the main research communities. Regarding the number of publications per year, it is obvious that most contributions were published in the field of systems engineering. However, the analysis of contributions submitted to these main venues shows that there is an emerging interest on SysML in the research field of software engineering since 2013. A reason may be that systems are becoming more and more software intensive and since 2013 different initiatives (such as Industry 4.0 in Germany to name one of the most influential ones) increasingly have started to implement sophisticated features for production area based on Internet of Things (IoT), Cyber Physical Systems (CPS), Cyber Physical Production Systems (CPPS), etc. which are focusing on both software and hardware. 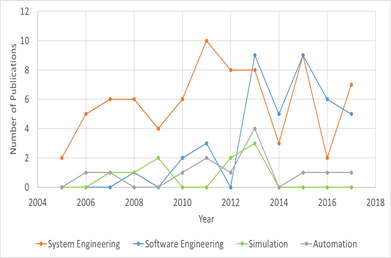 Figure 3: Number of publications per year regarding the research fields of the 12 most prominent venues (included number of studies: 579) 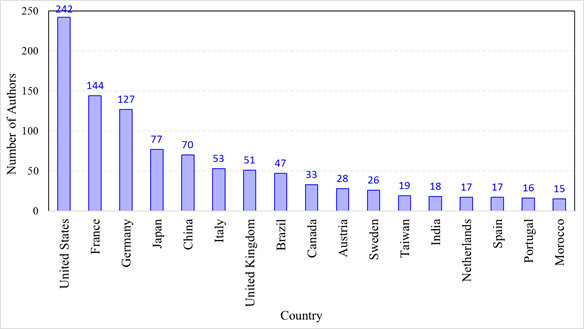 Figure 4: Number of authors per country with at least 15 authors

SysML research takes place worldwide with major contributors especially located in the USA, France, and Germany (see Figure 4). However, we discovered that the research interest on SysML topics seems to be stronger in Europe rather than in other continents (see Figure 5). The social network analysis shows an active community that fostered the discussion on SysML over the years. This network created impact in several engineering domains, ranging from frequently cited basic knowledge (e.g., system and simulation modeling using SysML) to contributions on very specific approaches (e.g., SysML4Modelica, SysML4Mechatronic). The interest on SysML has been expanded, since researchers moved from one research group to another. 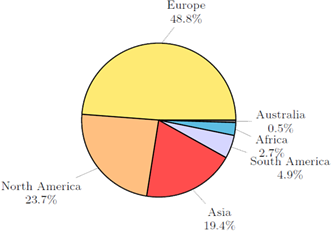 Figure 5: Percentage of numbers of authors per continent

For the classification of our different publications, we used three different kinds of categorization:

Figure 6 shows the systematic map of SysML publications regarding type facets, systems engineering phases, and contribution types. This figure presents the interplay of all the probed categories and their classification.

It turns out that in the area of systems engineering the phases design and validation are predominant topics in all type facet categories. Thus, design and validation are clearly the dominant engineering phases in the usage of SysML. Regarding contribution types, we concluded that the types focusing on technology and notation are more likely to be found in the research type facets “Solution Proposals” and “Validation Research”.

Most of the publications in our result set deal with problems in the design phase followed by the V&V phase. To realize their approaches, the authors mostly develop their own techniques and notations. Thus, there are a plethora of papers dealing with SysML extensions or transformations to other languages, techniques, and tools. To visualize the different transformations, we created a formalism transformation graph (FTG) [4] for our mapping study. In addition, we used the same principle for creating a formalism extension graph (FEG) showing the different extensions (mostly in terms of profiles) proposed for SysML.

Figure 7 shows the FTG as heat map (fewer publications: blue; at least 10 publications: red) with its various transformations of SysML to other languages for different application scenarios such as simulation, verification, analysis, and extracting code. The most prominent transformations are: extracting verification models (e.g., different kinds of Petri Nets, PRISM) and extracting simulation models (e.g., Modelica, Simulink). The FEG (see Figure 8) visualizes the different extensions of SysML used in the approaches, techniques, and methods introduced and presented in the papers of our result set. Again extensions for simulation are predominant, but also extensions for architecture modeling, systems of systems, and automotive are frequently proposed. 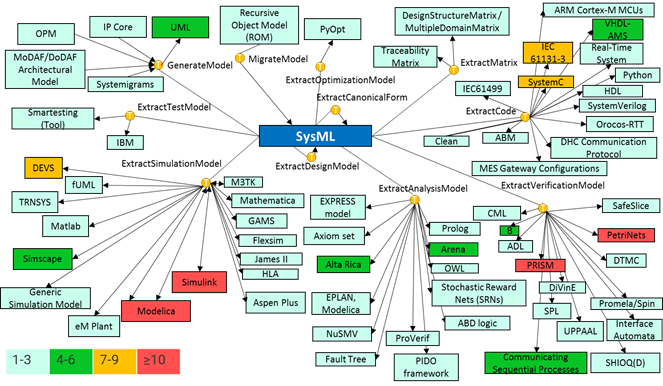 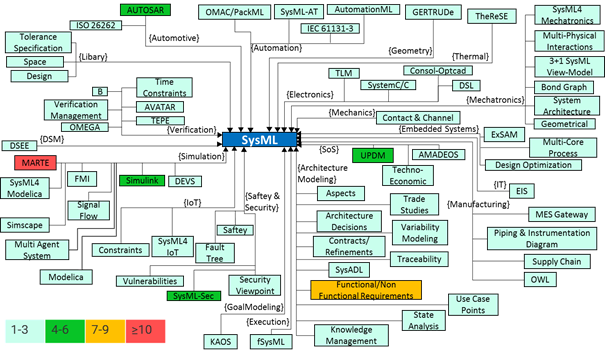 Currently, the OMG is working on a new version of SysML (abbreviated SysML v2). Based on the ongoing discussion, it becomes apparent that the main challenges regarding the usage of SysML, which we have identified and discussed in the mapping study, are also admitted in the current work of the standardization group. For instance, SysML v2 is intended to expand the requirement diagram by formal definitions of non-textual requirements. The issue of ambiguous operational semantics of SysML should be overcome as it has been done also for UML with fUML. There are also planned enhancements to have a timing component in models, which is an important issue, e.g., when modeling continuous systems in combination with discrete systems. Our mapping study reveals that there is still a need for studies considering both parts of CPS at the same time.

Contact us if you have any questions or if you like to build on our data set. We are also planning to continue the analysis of the data set for other research questions and would be happy to find collaborators. Just send us an email (sabine.wolny[at]jku.at; alexandra.mazak-huemer[at]jku.at; manuel.wimmer[at]jku.at)