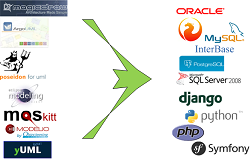 They were a completely failure from a business point of view (for several reasons as I reflected at that time) but since some people seems to be interested in the project itself I’ve released it as open source software.

Feel free to clone / contribute to the Git repository I’ve created in GitHub . I still believe in the ideas behind those services, mainly the idea of having smart code generators implementing the Pareto Principle for model-driven development

where many of the “dumb” CRUD code can be easily automatically generated (without having to explicit model that functionality) through scaffolding features offered by the target programming framework.

And I do have plenty of ideas of how to move this forward (e.g. there are now some pretty interesting full-stack Node frameworks  like Keystone.js that could be a nice target) but I doubt I will have the time to work on them anytime soon so feel free to offer a helping hand!.  Do it, even if you don’t think the current code can be reused in any way, again, exploring these ideas and discussing how to make them possible is the goal so I’m open to any kind of collaboration on this.

DISCLAIMER: This is just the core of the classes I was using at the time. Those classes were never created with the intention to release them to the public so there are not commented (and/or some comments may not even be in English), code is of low-quality and all the other possible disclaimers you can imagine. Any use of those classes is at your own risk (but I still hope they are useful to somebody).