Some time ago, we discussed the need for a Journal of Negative Results in Software Engineering . Well, today, we’re not yet announcing the creation of such journal but the publication of a Special Issue on “Negative Results in Empirical SE” in the Empirical Software Engineering Journal, which is a more realistic first step to gauge the interest of the community on the topic and see the kind of negative results were contributed.

First, what  do  we mean  by  negative  results?   Negative  or  null  results—that is, results  which fail  to show an eﬀect—are all  too uncommon in the  published  literature for many reasons, including publication  bias and self-selection eﬀects. Such results are nevertheless important  in showing the research directions that  did not pay  oﬀ. In  particular,  “replication  cannot be meaningful without the  potential acknowledgment of failed replications”  [3].

We believe negative results are especially  important  in software engineering, in order to firmly embrace the nature of experimentation in software research, just  like most of us believe industry  should do. This  means scientific inquiry that  is conducted along Lean  Startup  [7]  principles: start  small, use validated learning and be prepared to ‘pivot’,  or change course, if the learning outcome was negative.  In this context, negative results are, given their  methodology,   failed  approaches that  are  just  as  useful as  successful approaches: they point out what hasn’t  worked, in order to redirect our collective scientific eﬀorts. As Walter Tichy writes in [9], “Negative results, if trustworthy,  are extremely important  for narrowing down the search space. They  eliminate useless hypotheses and thus reorient and speed up the search for better  approaches.”

The  software industry  has long had a strong  belief in the power of intuition: that  productivity  can vary  by  10x among programmers, or that  problems found doing requirements analysis cost dramatically  less to fix than code bugs, among many  others (see Glass  [5] and Bossavit  [2] for more details  on this  folklore).  Part of our job as researchers must be to give good empirical weight for, or against, commonly held beliefs. Negative results are an important  part  of this discussion.

Publication  of negative results is rare,  even more so in software engineering where,  in contrast to life sciences,  there are no specific tracks or journals to present such results.  Data that led to negative results in software engineering is very rarely shared. Even open datasets are uncommon in software engineering, despite emerging eﬀorts such as the  PROMISE repository (http://openscience.us/repo/).  Many  researchers  remain  reliant  on single sources like Github  for a limited  set of artefacts  (predominantly  code). By contrast,  other fields in computing emphasise, as a community eﬀort, the production and maintenance of open datasets, e.g., in machine learning (see, for example, the UCI machine learning  repository  at  https://archive.ics.uci.edu/ml/). It  seems that  the software engineering community needs to consider developing a culture that  accepts negative results as something that  is as important  to share as novel inventions.

How does this influence the papers we targeted for this issue? First and fore- most, each of the papers selected adheres to the highest standards of the journal. Our view is that published negative results cannot sacrifice empirical rigour.  A negative result due primarily to misaligned expectations or due to lack of statistical power (small samples) is not a negative result,  rather a poorly designed experiment.  The negative result should be a result of a lack of eﬀect,  not lack of methodological rigour.

Indeed,  negative results often come because the investigation is so well conducted. For instance, insisting on suﬃcient power for an experiment (for example, by choosing larger  numbers of sub jects) can mean that  the noisy result that  con- firmed your suspicions when N=10 (a ‘positive’  result) disappears when N=100, simply  because there  is always a random chance you will reject  the  null  despite the true eﬀect not existing. Statistician  Andrew Gelman compares this to trying to measure the weight of a feather with a bathroom scale, and the feather is in the pouch of a jumping kangaroo [4].

The  six papers presented in this special issue cover a wide array of software engineering topics, and tend to tackle problems for which experimental approaches are more applicable. The topics range from experiments related to logging, the validity of metrics,  and sentiment analysis through to productivity analysis,  eﬀort estimation and revisiting the fragile base class problem. We do not have any submissions reporting negative results using qualitative  research approaches; we think this is partly  because there is no such thing in a qualitative framework (vs.  the erroneous but often-used “p  <  0.5” approach, where a ‘negative’  result  is when p >  0.05, which is not at  all  what p-values are telling  you). The  papers are as follows:

The first paper in this special issue, titled “Empirical  Evaluation of the Eﬀects of Experience on Code Quality and Programmer Productivity:  An  Exploratory Study”,  by Dieste et al.,  examines the claim that expertise improves code quality and programming productivity. The authors conducted an experimental task with both industry and academia (students),  focusing on an Iterative  Test-Last assignment (developing tests and production code in parallel).  They measured the experience of each subject,  and assessed their performance on the task.  Their results show that there is no evidence that experience is a significant factor in either quality or productivity.

Serebrenik et al.  then consider what sentiment analysis tools are bringing to software engineering research,  in  “On  Negative  Results when Using  Sentiment Analysis Tools for Software Engineering Research”. Sentiment analysis tools claim to measure the positive (e.g.,  “great code”) or negative opinions (e.g.,  “this code is not very good”) expressed in text corpora. Since researchers are now using these tools to evaluate software artefacts,  e.g. in discussions of pull requests for Github, the authors conducted an experiment to understand how well these tools worked, and whether they matched what developers actually thought of the artefact. They conclude that  a)  tools only weakly agree with each other,  and b)  replicating  existing  studies using these tools was highly sensitive to the choice of the tool used. Read it here.

In  “On the Correlation between Size and Metric Validity”,  Gil and Lalouche investigate the correlation between software metrics and code size (as measured in Source Lines  of Code (SLOC)). Given the importance of software metrics in the field, and in a nice example of replications providing multiple data points, similar studies were conducted earlier  (see [8, 6]. This study adds more pro ject data, but also examines the impact of both size and a given metric on external features, such as quality.  They conclude that  “one has to either decouple the metrics from size or show that the external features themselves are not correlated with size”,  since there is a strong correlation between metric and size.

Saban et al.,  in “Fragile  Base-class Problem, Problem?”,  explores the well- accepted assumption that “misusing” inheritance and composition in ob ject-oriented programming (e.g.  in the context of framework reuse where these two mechanisms are extensively used) negatively aﬀects software maintenance, since changes on the superclasses might cause faults in the subclasses (which therefore become more “fragile”). After a quantitative analysis,  the authors conclude that fragile classes are not more fault prone than other classes. An additional qualitative study shows that the detected faults in those classes also were not caused by fragile base classes, showing that the fragile class problem may not be as problematic as previously thought in the literature. Read it here.

Our fifth paper, “Negative Results for Software Eﬀort Estimation”, by Menzies et al.,  seeks to assess whether new software eﬀort estimation methods are actually better than older COCOMO-based methods initially proposed many years ago. Menzies et  al.  show that  Boehm’s  2000 COCOMO   II model  [1] works as well (or better)  than all approaches proposed since COCOMO  II,  for projects with enough data available to enable parametric estimation based on the 23 COCOMO attributes characterizing a software project.  In short,  in 2016 new innovations in eﬀort estimation have not superseded parametric estimation.

Finally,  in “To   Log,  or Not To   Log:  Using Heuristics to Identify  Mandatory Log  Events  – A  Controlled Experiment”,  King  et  al.  highlight the challenge of deciding the Mandatory Log Events  (user activities that must be logged to enable forensics) to track for a given security analysis goal. Authors conducted a controlled experiment to evaluate the eﬀectiveness of three diﬀerent methods (standards-driven,  resource-driven and heuristics-driven)  to perform this task and show that none of them is significantly better than the other.  This highlights the need for additional research in this area.

(some papers are not yet online I’ll add the links when available, you can also write directly to the author, ping me if necessary, to get a free copy of the paper)

We would like to acknowledge the rigour and dedication of the many reviewers of this special issue. One observation that we would make as editors of this special issue is that reviewing negative results is hard: not only are negative results papers diﬀerent from the norm,  they require a diﬀerent way of thinking and critiquing.  In many cases, reviewing the papers was a collaborative eﬀort between reviewer and editor,  to try  to ensure that the negative result was as clearly expressed as possible.  We thank our open-minded reviewers for their support in this. We are also thankful to the Empirical Software Engineering Editors in  Chief,  Lionel  Briand and Thomas  Zimmermann, for their support,  help and patience throughout the process of preparing  this special issue.

Even if the issue has now appeared online I think it’s still worth to keep below the call for papers since it may help anybody interested in organizing some other kind of issue / event around these same ideas (and we hope somebody does that and our effort does not stay as one in a lifetime inititative!). 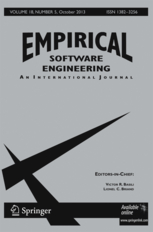 Editors of the Special Issue:

Description of the Special Issue:

Negative or null results — that is, results which fail to show an effect — are all too uncommon in the published literature, for many reasons, including publication bias and self-selection effects. And yet, particularly in engineering disciplines, such results are important in showing the paths which did not pay off. In particular, “replication cannot be meaningful without the potential acknowledgment of failed replications” [LAEW, FH]. For example, did your controlled experiment on the value of dual monitors in pair programming not show an improvement over single monitors?  Even if negative, results obtained are still valuable when they are either not obvious or disprove widely accepted wisdom. As Walter Tichy writes, “Negative results, if trustworthy, are extremely important for narrowing down the search space. They eliminate useless hypotheses and thus reorient and speed up the search for better approaches.” [Tic]

In this special issue, we seek papers that report on negative results. We seek negative results for all types of software engineering research in any empirical approach (qualitative, quantitative, case study, experiment, etc.). Evaluation criteria will be based on:

Additionally, we seek reviewers who would, besides reviewing submissions for the special issue, also be willing to provide an evaluation of negative results based on their experience of reviewing submissions at major venues (such as ICSE, EMSE, etc.). The reviewers’ evaluations of the impact of a possible ‘positivity bias’ will be compiled into a report included in the special issue (either in the editors’ introduction or as a separate paper). Such evaluations should be no more than 2 pages and describe either one specific experience or general perceptions of the problem.

If you have questions/comments or would like to volunteer to be a reviewer of the papers, please contact the guest editors.