Quantum computing is getting closer and closer to being embedded in commercial information systems to provide a variety of services to companies and organizations. This is not an assumption, but a fact. We are now living in the quantum decade, where institutions are starting to realize the business value that this technology can provide.

Sometimes, when we talk about quantum computing, we may think that this domain of science belongs only to physics and mathematics, and that software engineering has nothing to do with it. However, this belief is totally wrong. Software engineering will play a crucial role when companies want (and are able) to evolve their current information systems towards a hybrid type of information system, combining both traditional and quantum computing by making use of the services of providers such as IBM, Google or Microsoft among others. Although software engineering can help in different ways in this evolution of systems, today we will focus on how Model-Driven Engineering can achieve this.

Quantum computing has great potential to change many of the sciences we know today. A large number of papers have been published in which, even if only theoretically for now, they show that certain algorithms developed based on the principles of quantum mechanics (which is where quantum computing comes from) can be very useful. This is because quantum computing can deal easily with certain types of problems that are nowadays highly demanding to our current systems (i.e., the number factorization).

Once the commercial quantum computers arrive (with an acceptable number of qubits), companies will migrate part of those classical systems that carry out complex operations or algorithms to quantum computers. The implementation of quantum computing does not necessarily imply a full replacement of the classical information systems, but at some point, both paradigms could work together, creating, as mentioned before, hybrid classical-quantum information.

The evolution of the systems does not imply discarding the whole classical information systems, given that they are still useful for their organizations. Those systems may embed a vast amount of critical-mission knowledge that probably is not located elsewhere, and their replacement is highly risky. Another reason not to discard the classical part of the systems is that there will be certain operations that, being so simple, their implementation using quantum computing will not lead to an increase in performance.

The overall process of can Quantum Software Reengineering can be seen in Figure 1, which follows the three phases of traditional reengineering but is adapted to face the challenges that may occur during the evolution towards quantum computing. Those three phases consist in:

Before starting to talk about how the transformation from KDM to UML models has been carried out, we believe it may be interesting to explain how metamodels have been extended to work with the different quantum components that may appear in the programs.

The first standard of the process, the Knowledge Discovery Metamodel-ISO /IEC 19506 is a standard developed for the modernization of those systems that have suffered the passing of time and the technology with which they have been developed is obsolete or close to being obsolete. This standard was the first of the set of standards proposed within ADM, and it provides a comprehensive view of the application structure and data, identifying the different components of the systems and their interrelationships and represents it in a technology-agnostic way at a higher abstraction level. The fact that the representations of the systems are technology-agnostic was an important factor at the time of selecting the standard because this allows us to make a common representation among all the different quantum programming languages and frameworks that now exist. 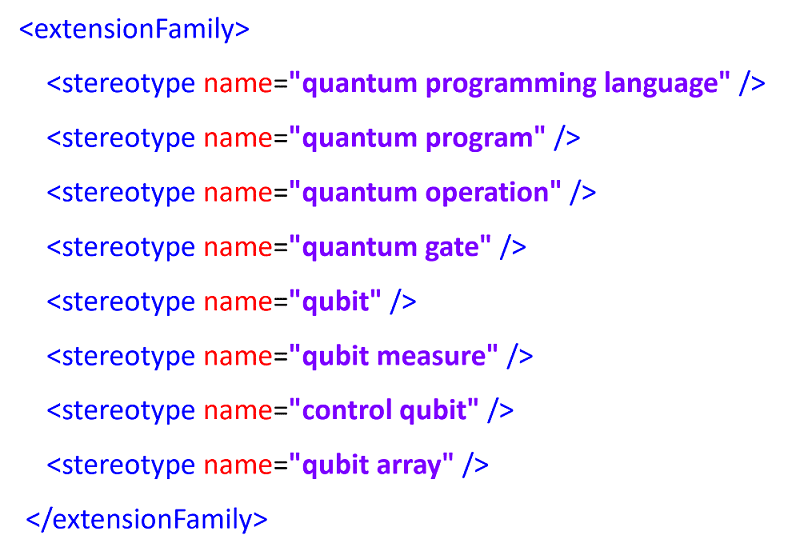 Now, for the second metamodel we chose UML. Because it is such an industry standard, there is a wide variety of tools for modelling diagrams using UML, and thus a wide knowledge of software engineers who have already worked with UML. To carry out the extension of the metamodel, UML provides us with different mechanisms. We chose to create a profile, which we named the UML Quantum Profile. Using a profile allows us, when generating UML models, to make them fully compliant with UML. This advantage would allow us to use existing modelling tools. In Figure 3 we can see the profile that will allow us to graphically represent quantum programs by means of activity diagrams. On the right side of the image, the stereotypes that have been added to be able to work with the different quantum entities are grouped together: quantum circuit, qubit, quantum gate, controlled qubit, measure and reset. The left side of Figure 3 shows the UML metamodel excerpt for representing UML Activity Diagrams. Leftwards arrows from stereotypes to metaclass elements are used to indicate that the properties of a metaclass are extended through the respective stereotype. 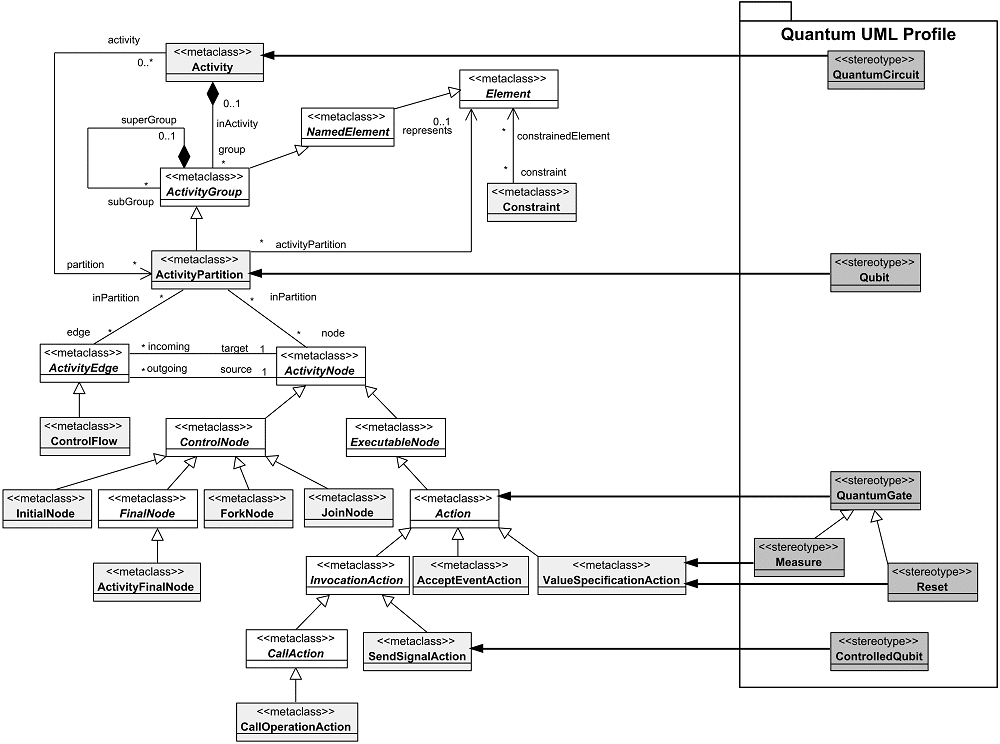 Now that it is clear why we have to carry out a model transformation (to comply with the Quantum Software Reengineering process) and the peculiarities of these models (the extensions), it is time to talk about how we have actually defined the model transformation.

The KDM-to-UML transformation followed a top-down order. Thus, the first KDM elements that were transformed to UML are those that group the remaining nested elements, i.e., the Segment element as the KDM model’s root element. Whilst the last, and more atomic, KDM element is the actionRelation, which specifies on which qubit a quantum gate acted and its flow control.

A simple example of model transformation can be seen in Figure 4 where the input model only contains the description of the root element (a comparison would be as if we had a Java file that only contains the description of a class) and a couple of children (the declaration of a qubit and a Hadamard quantum gate that is applied on the declared qubit). The root element in KDM has type CompilationUnit, because it defines a container of all the program elements and will be transformed into an element of type Interaction, which is its UML equivalent for modelling activity diagrams. In the middle of the Figure 4 we can observe the rule defined in ATL CompUnit2Interaction where it describes that the qubits of the input model will be transformed into edge and the Hadamard gates into ownedNode. Finally, the right side of Figure 4 shows the result of the transformation.

In Figure 5 we can see another example of how the transformation of KDM models to UML has been carried out in ATL, but we will focus on how the representations of the quantum gates are transformed in the models, more specifically the Hadamard gate. On the left side of Figure 5 we can see that the Hadamard gate is represented in KDM with the ActionElement type. Inside the ActionElement there are three children, one of type source and two of type actionRelation, which on the child of type Addresses is indicated on which qubit is that quantum gate applying and the another of type Flow indicates the identifier of the next quantum gate to represent the flow of information. In the middle of Figure 5, we can see that two rules have been defined, Address2CallOperation and Flow2ControlFlow. Within the first rule, we can see that it is specified that it will obtain the child of type Addresses and transform it into CallOperationAction where its attributes will come from the value obtained from the from and to attributes of Addresses. 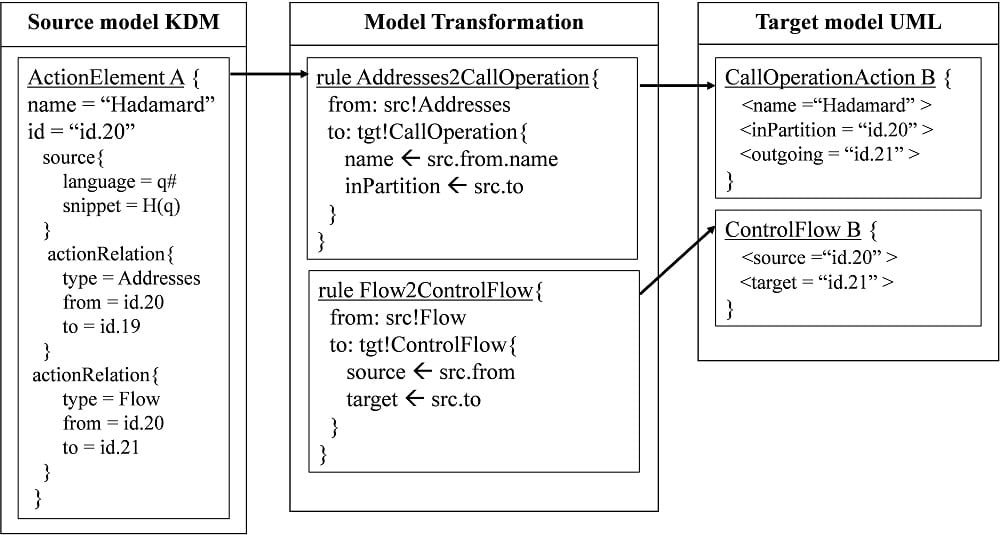 Figure 6 shows the result of a complete transformation of a KDM model (left) to UML (right), more specifically, the transformation of the KDM model of the Quantum Teleportation algorithm developed in Microsoft’s quantum programming language, Q#. For reasons of length, the models are shown as a tree. In the KDM model (left of the Figure 6) we can find in the first lines the ExtensionFamily explained in previous sections. Subsequently, we can find the description of the root element CompilationUnit and the nested methods or functions defined in the Q# program and represented as Callable Unit. Within each Callable Unit are nested the qubit declarations (defined as StorableUnit) and the quantum gates. At the top of the UML model (right of the Figure 6) can be found result of the transformation from CompilationUnit to Interaction. In addition, each of the Callable Units has been transformed to Activity but keeping its corresponding name. Two important changes can be seen with respect to the KDM model: (i) the information flow is no longer defined through attributes of the quantum gates, but with elements of type Control Flow, and (ii) an Initial Node and a Final Node are declared in order to be even more explicit when describing the information flow. Another detail to highlight in the UML model is that each quantum gate, depending on the effect they have on the qubits, belongs to one type or another. A further explanation of the overall quantum transformation can be seen in this paper. 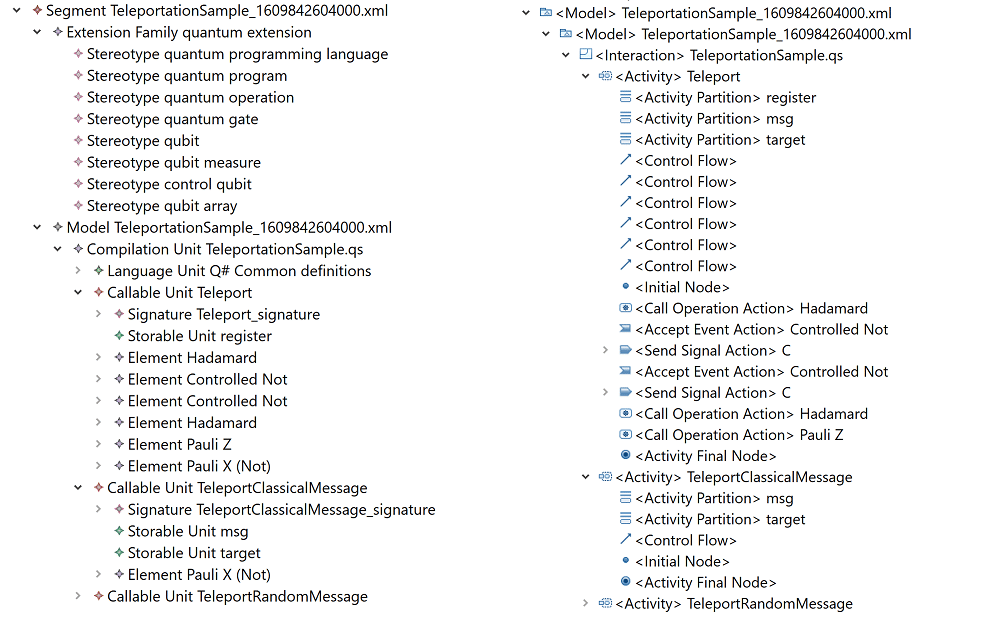 Current standards and metamodels are not yet adapted to work with quantum components. This is a problem when hybrid information systems are about to be implemented in companies all over the world. We have chosen to extend the metamodels by creating an ExtensionFamily in the case of KDM and a profile in UML. The transformation of the KDM models to UML has been carried out using the ATL transformation language.

This proposal is limited by the fact that only Q# is the only quantum programming language that can parse and generate KDM models. We are working on implementing other programming languages such as OpenQASM3 or Qiskit. Another limitation could be that the transformation only generates UML activity diagrams, but more diagrams will be defined in the future as classes, sequence or even state.