More and more organizations are making their data available online, resulting in a growing market of technologies and services to help consume data and extract its real value. One of the several ways to publish data on the Web is via Web APIs. Standards and frameworks such as Open API or API Blueprint (see all your options when modeling APIs) offer a way to create Web APIs but OData (“the best way to REST”) stands out from the rest as it is specifically tailored to deal with data sources.

We propose an approach that leverages on model-driven techniques to facilitate the development of OData Web APIs. The approach relies on a UML profile for OData allowing to annotate a UML class diagram with OData stereotypes.

In this short paper: A UML Profile for Odata APIs by Hamza Ed-douibi, Javier Luis Cánovas and myself, to be presented at ICWE’17 , we describe the profile and show how class diagrams can be automatically annotated with such profile.

Read below for the full details of the approach or get an overall idea with the slides we used in the talk.

A UML profile for OData Web APIs from Jordi Cabot

Recent years have seen an explosion of data available online via Web APIs, coming from both the public sector and private sources. Unlike other approaches like RDF, Web APIs provide a simple way to query structured data by relying only on the HTTP protocol. The increasing number of Web APIs has actually led to an explosion of specialized applications that combine data from different sources to provide insights on specific topics not visible at first glance, thus contributing to the growth of data economy.

While standards and frameworks such as Open API3  or API Blueprint4  offer a way to create Web APIs, the Open Data Protocol (OData)5 is specifically tailored to deal with data sources. Thus, in the last years, OData protocol has been accepted as the favored standard to publish datasets as Web APIs. As a result, many commercial infrastructures have integrated OData to their products (e.g., SAP, IBM WebSphere, JBoss Data Virtualization).

OData enables the creation of data-centric Web APIs, which allow resources, identified using Uniform Resource Locators (URIs) and defined in a data model, to be published and edited by Web clients using simple HTTP messages. It defines also a small URL-based query language to identify and query the data described in the data model. The current version of OData (version 4.0) has been approved as OASIS standard [4]. However, creating an OData Web API is still a hard and time-consuming task for data providers as they have to choose between relying on commercial solutions, which are heavy and require a deep knowledge of their corresponding platforms, or create a customized solution to share their data.

Model-Driven Engineering (MDE) is a paradigm which emphasizes the use of models to raise the level of abstraction and automation in software development [10]. MDE aims to address platform complexity by using models and model transformations for the specification/generation of software artifacts. Thus, MDE techniques have been increasingly used to automate the generation of Web applications [8, 11, 2, 12, 3, 7, 6, 9]. While these existing MDE approaches cover a variety of technologies (e.g. web services and ubiquitous applications), they lack specific support for OData (and REST APIs in general, with very few exceptions [2, 9, 6]).

In this sense, our goal is to advance towards the definition of an MDE infrastructure for the generation (and reverse engineering) of OData applications. As a first step towards this vision, this paper presents a UML profile for OData that enables an easy definition of OData sources at the model level.

The remainder of this paper is structured as follows. Section 2 shows the running example used along the paper. Section 3 presents the OData profile and Section 4 presents the rules to generate default profile definitions. Finally, Section 5 concludes the paper and presents some future work.

We define a simple OData Web API of an online store as a running example. This example is inspired in the official reference example of the OData community6.  Figure 1 shows an excerpt of the UML class diagram for the Web API data model, which includes the classes: Product to represent products, Category to classify products, FeaturedProduct for premium products to be featured in commercials, and Advertisement which records the data about those commercials.

In OData data models are not expressed in UML but as XML metadata documents describing an Entity Data Model (EDM) using the Conceptual Schema Definition Language (CSDL) [5]. Web clients use this document to understand how to query and interact with the API using standard HTTP methods. Listing 1 shows an excerpt of the metadata document for the data model shown in Figure 1.

The Schema element describes the entity model exposed by the OData Web APIs and includes the entity types Product and Category, FeaturedProduct,  and Advertisement,  which also includes properties and navigation properties to describe primitive attributes and associations, respectively. The Schema element includes also an EntityContainer element defining the entity sets exposed by the service and therefore the entities that can be queried. In the following section, we will describe the OData profile which enables the generation of such file.

A UML Profile for OData

To formalize domain-specific knowledge, we can either create a new metamodel or ex- tend an existing modeling language. Given the similarities between OData and available concept in UML (specifically, UML class diagrams), we opted to use the UML ex- tension mechanisms (providing stereotypes, tagged values, and constraints to adapt the UML metamodel to different platforms or domains) as the basis for our OData modeling language. Therefore, this section presents our OData profile for UML.

We organize the OData profile into two parts, namely: (i) the Entity Data Model (EDM) which describes the data exposed by an OData Web API, and (ii) the advanced configuration model, which defines additional characteristics or capabilities of OData Web APIs (i.e. what parts of the EDM can be modified, what permissions are needed,…).

Fig. 2. OData profile: (a) the service wrapper and (b) data types elements.

OData Service Wrapper. An OData Web API exposes a single entity model which may be distributed over several schemas, and should include an entity container that defines the resources exposed by the Web API. Figure 3a shows the extension of UML to define these elements. We consider that the entity model is defined in one schema, represented by the element Model of a UML class diagram. Thus, ODService stereotype extends the metaclass Model and includes: the version the OData specification, the namespace of the schema (e.g., com.example.ODataDemo), an alias for the schema namespace (e.g., ODataDemo), and the name of the entity container (e.g., ODataService).

Figure 2b shows the stereotypes related to data types and their mapping with UML concepts. The abstract stereotype ODStructuralType defines the common features of all the structural types and includes a name, a property indicating whether the structural type cannot be instantiated (i.e., abstract property), and a property indicating whether undeclared properties are allowed (i.e., openType property7).

ODStructuralType supports also the concept of inheritance by allowing the declaration of a base structural type (i.e., basetype association). The stereotypes ODEntityType and ODComplexType inherit from ODStructureType and extend the metaclasses Class and DataType, respectively. Additionally ODEntityType includes the hasStream property, indicating if the entity is a media entity (e.g., photograph). The stereotype ODPrimitiveType extends the metaclass PrimitiveType and includes a name which corresponds to the associated OData primitive type (e.g., Binary, Boolean, etc.). The stereoType ODEnumType extends the metaclass Enumeration and includes a name, a boolean property indicating whether more than one member may be selected at a time (i.e., IsFlags property), and the corresponding OData type.

The profile also allows modeling the entity sets and singletons exposed by the OData service. While an entity set can expose instances of the specified entity type, a singleton allows addressing a single entity directly from the entity container. These two concepts are materialized with the stereotypes ODEnititySet and ODSingleton which extend the metaclass Class.

To ensure the validity of the applied stereotypes, we have enriched the profile with a set of constraints written using the Object Language (OCL) [1]. For instance, since the stereotypes related to properties and navigations properties extend all the meta- class Property, ODPropertyConstraint ensures that the stereotype ODProperty is applied to a UML property element representing an attribute.

OData defines annotations to specify additional characteristics or capabilities of a meta- data element (e.g., entity type, property) or information associated with a particular result (e.g, entity or property). For example, an annotation could be used to define whether a property is read-only. Annotations consist of a term (i.e., the namespace- qualified name of the annotation), a target (the element to which the term is applied), and a value. A set of related terms in a common namespace comprises a vocabulary. Our profile supports the three standardized vocabularies defined by OData, namely: the core vocabulary, capacity, and measures.

Figure 4 shows an excerpt of the profile defined for representing annotations. The stereotype ODAnnotations extends the metaclasses Model, Class, and Property, and has an association with ODVocabulary,  thus allowing adding annotations accord- ing to the vocabularies. ODVocabulary is the root class of the hierarchy of vocabularies supported by the OData profile (i.e., core, capabilities, and measures vocabularies). OData profile defines

Our OData profile can be used to annotate any new or preexisting UML class diagram. Nevertheless, to simplify the application of our profile, we have also developed a model- to-model transformation that given an standard UML model, returns an annotated one by relying on a set of default heuristics that embed our knowledge on typical uml-to- odata design decisions. This annotated model can be regarded as just an initial option to bootstrap the process that the designer can then modify at will.

Table 1 summarizes our mapping strategies. From left to right, the columns of the table show (1) the involved UML element; (2) the conditions to apply an stereotype (if any), (3) the stereotype to be applied; and (4) the values of the stereotype properties. In a nutshell, each class is mapped to an entity type and is exposed as entity set, each attribute is mapped to a property, and each navigable association is mapped to a navigation property. 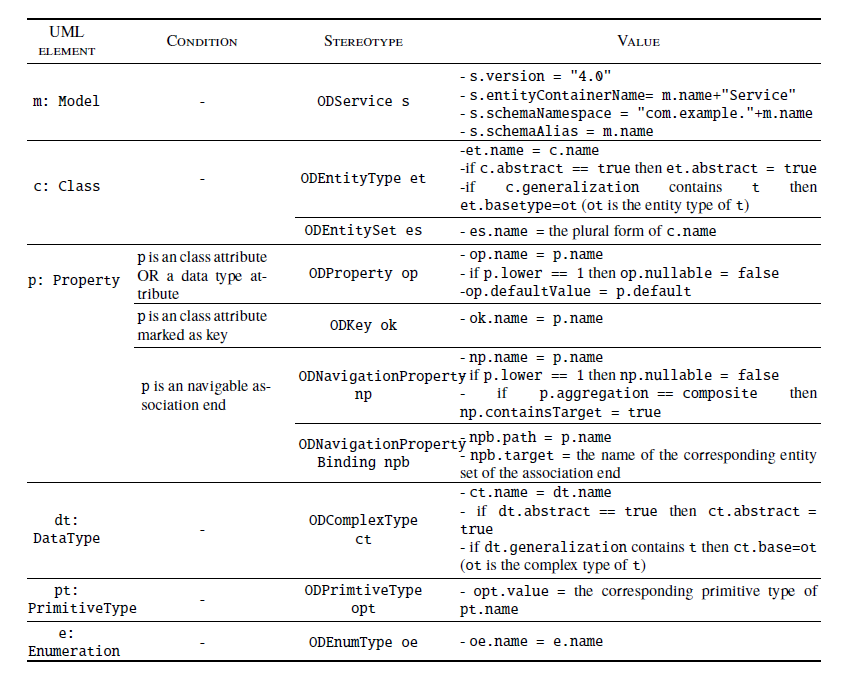 Figure 4 shows the running example including some of the generated OData profile annotations. This first version of the class diagram can later be customized and used in other model-driven processes to fast prototyping OData Web APIs.

Fig. 5. UML class diagram of the running example annotated by the generator.

In this paper, we have presented a UML profile to model OData Web APIs and the corresponding annotation generator for any UML class diagram. We believe our approach is the first step to boost the model-based development of OData Web APIs, offering developers the opportunity to leverage on the plethora of modeling tools to define forward and reverse engineering to generate, visualize and manipulate OData sources. The OData profile along with the default profile generator are available as an OData Open Source Eclipse plugin. The plugin repository includes also the steps to reproduce the running example.

As future work, we aim at extending our profile in order to capture additional OData behavioral concepts such as functions and actions. We would also like to integrate this profile with other web-based modeling languages like IFML (e.g. by enabling the use of OData-like data sources as part of the interface modeling components) in order to create a rich modeling environment combining front-end and back-end development. Finally, we plan to complement the profile support with model-to-text and model-to- model transformations to offer, for instance, the (semi)automatic code-generation of OData services from the annotated models.