Tagging the Model Zoo – Symbols for Model Conformance and Care

The previous post on refactoring modeling technology dealt with basic syntax issues of modelling languages. While this user experience side of the equation is not to be neglected, there are quite more challenging aspects. A crucial question is that of well-separated concerns, which constitute the architectural backbone of any modelling ecosystem. Our goal is to craft a firm fundament which does not just collapse into dust, like too many modelling architectures did before.

Before we can do that, we need to sharpen our terminology and some categorisations, with which this post is concerned.

Inheritana Jones and the Golden Repository

Having fought the mechanical dragons of Cath’edrâl and sprinted with constant velocity over the monotonous plains of Agîlë, the hero reaches the Isolated Island and enters the Golden Repository. Inside, bright light shines on thousands of inscripted tablets, containing the purest wisdom of mankinds modellers… …but behold: the tablets are cursed! They all show just tiny variations of one and the same drawing, three rectangular boxes with a few strokes inbetween!

Maybe you’ve encountered the same irritation when accessing one of the model repositories that were designed to foster collaborative model exchange and reuse, but contained next to nothing of immediate use, except for illustration and inspiration. The author, too, designed such a great repository once.

When talking about models and abstraction levels, people tend to understand very different things by the term ‘Model’ and usually it is all but clear what to do with a given one. Worse, not just their contents, but also their storage formats differ so much that it seems there is a 1:1:1 correlation between models, model formats and tools to read them. 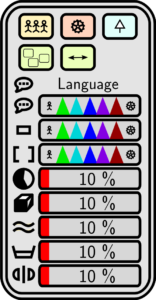 As a simple attempt to bring more light into a quick human grasp of models, here’s a suggestion for a Model Conformance & Care Tag. The meaning of the various symbols is explained in the following.

We will use the introduced terminology in the next post concerning architectural abstractions and separation of concerns.

Feel free to provide more categories in the comments, I’m happy to integrate them here – at least the first 100 suggestions 😉

Washing symbols are a universal way to quickly explain key properties of a piece of cloth and how you should handle it. A similar approach for models would help designers to understand the context, goal, quality,... of a model they just ran into. Click To Tweet

The listed categories can help to understand what the purpose of a given model is. But what should a machine do with them? First, the classification depends on human judgment, specifically the quality rating, and is thereby a bit arbitrary. Second, it is still far from precisely defined what to do with the model.

Lately, on the Death Star

I’ve always been deeply impressed by the sequence in Star Wars where R2D2 injects his universal plug into the Death Stars universal socket, and it just works – compare that to today’s compatibility issues on good old earth, even between devices from the light side.

Attaching and finding metadata is straightforward, there is no lack of approaches. Every tool does it, some with gruesome ad-hoc semantics, which limits their applicability and causes a good deal of fragmentation. While it seems a challenging task to define ‘the’ metadata format in general, we cannot close our eyes and avoid the problem for the modelling domain, since already within its limited scope there are plenty of players who need to be united.

In the spirit of what was said on basic syntax properties of a good modelling language, a good metadata format should:

That again, as with models, leaves us with the tricky question of which conceptions to use. How can we unambigously describe the role of a model within a project setup?

IDEs and other tools do that with good guessing based on file names and locations. Such mining strategies are helpful, and could be employed to e.g. annotation scanning in source code in github to extract modelling artefacts in the first place. But it is unlikely that these approaches scale well enough if we broaden the range of modelling artefacts, as is our plan. Moreover, it should be the goal to provide a clean interface for tools to build upon.

Separation of Concerns is a widely undisputed goal in IT architecture, and many attempts have been made to apply it to a broad variety of problem areas.

Both with our design of a good modelling language and with corresponding metadata we reached a point where we need to take a closer look on the matter we’re dealing with. There are many valuable approaches to build upon. This will be the topic of the next post.

I’m working in IT since the late ’80ies of the last century. Half of my time I spent crafting software of various kinds for customers, increasingly based on model related technology. The other half I invested in research and development of a fully model driven software production system and respective suitable concepts, most of which is available as open source or creative commons. Since the beginning of the millenium I’m doing this in my own Hamburg-based company and offering software production as a (model based) service — Andreas