PlantUML  is probably the most popular  textual UML tool   with over 15  millions UML models rendered. Textual UML tools enable you to define your models with some kind of textual language / notation and let the tool render the corresponding UML model for you. They typicall support class, sequence and use case diagrams but some, like PlantUML, cover almost all diagrams.

We recently caught up with Arnaud Roques (the person behind the tool) to chat about the past, present and future of PlantUML. You can read the interview here. Still, since the tool development is advancing non-stop, I thought it deserved a closer look to some of its latest ones. PlantUML supports all

PlantUML supports all important UML diagrams (class, use case, activity, sequence, component, deployment and object diagrams, see the language reference guide for details on the syntax) but, to me, the strong point of this tool is the variety of scenarios in which can be used.

As part of the “core” tool you can: 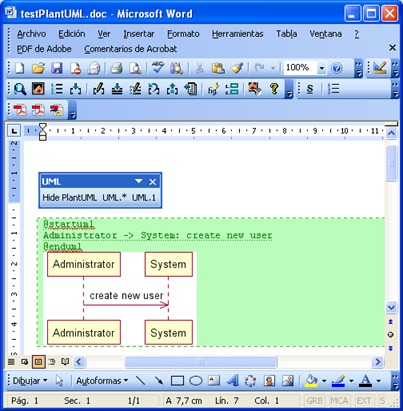 but even more interesting than these core features is the growing ecosystem of tools that extend PlantUML and let you do a whole bunch of amazing things with it. Let’s review some of them (and let me know if you know about others! ).

Some brave colleagues (I´m looking at you, Robert) have managed to draw class diagrams in LaTeX using the TikZ package. The results are really nice but it’s a lot of work.

Fortunately, PlantUML has come to the rescue and now offers the option to automatically generate the LaTeX/TikZ files for you, thanks to this new feature (still in beta, report your bugs here) you can go from this textual description of a UML class diagram:

to this TikZ description and rendered image (see it online here)

With this and this LaTeX package to simplify the writing of OCL expressions, life of researchers on UML/OCL topics is now easier than ever!

The tool plantuml2mysql offers a script to generate SQL DDL commands from your PlantUML model.

Class diagram to SQL DDL generation (i.e. generating a script to create in your relational database the tables implementing your UML class diagram design) is the most typical (and for many people the only useful one) code-generation scenario. There are plenty of tools able to do this but this one benefits from the simplicity of PlantUML to provide a limited but easy-to-use database generation functionality.

You can see below an example (the symbol ‘#’ is an added annotation to indicate the UML attributes that should be regarded as primary keys).

And you can also go the other way round. You can use PlantUML to generate a UML class diagram depicting the structure of your database. All database management systems use an internal data dictionary, i.e. a set of tables in the database that store information about the database itself, including the list of tables, the columns in each table, the indexes,… Therefore, writing a SQL query on those tables will return the information you need to draw the database structure in UML. All you need to do is to tweak a little bit the return of the query so that what you actually return is compliant with what PlantUML expects.

Phil Factor shows how to generate UML from SQL Server. As a quick reference, see below the query he used:

This PlantUML plugin for Jekyll enables you to embed UML diagrams in your Jekyll blog posts. Simply write something like

to get it working seamlessly with your blog text.

PlantUML Gizmo is a google docs add-on that enables the definition of textual UML models in your Google docs. The PlantUML source text is encoded within the link of the image in Google Docs, so you can edit it later and re-insert the diagram using PlantUML Gizmo. Btw, the author uses this extension to create the teaching material for his Software Engineering courses 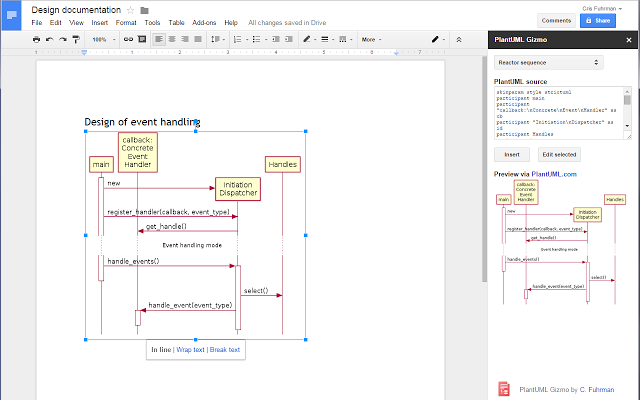 Integration of PlantUML in Google Docs

An experimental extension to Visual Studio, available in the VS marketplace to preview UML diagrams in Visual Studio.

See it working in the following animated GIF.