OpenAPI Bot: A Chatbot to Help You Understand REST APIs 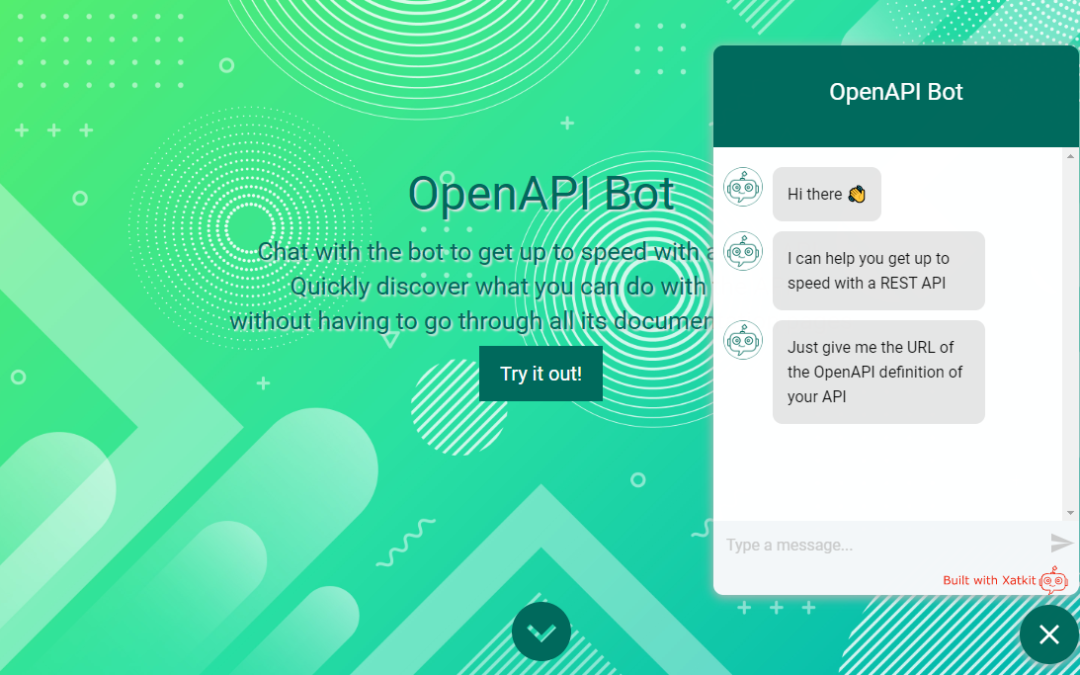 In this post, we present OpenAPI Bot, our chatbot to help you understand OpenAPI definitions. Current OpenAPI documentation tools mostly provide simple descriptive Web pages enumerating all the API operations and corresponding parameters, but do not offer interactive capabilities to help navigate the API and ask relevant information. Therefore, learning how to use an API and how its different parts are interrelated still requires a considerable time investment. To overcome this situation, OpenAPI Bot reads an OpenAPI definition for you and answers the questions you may have about it.

OpenAPI Bot is available here. Go ahead and give it a try. All feedback is welcome.

This work has been accepted at ICWE’20 (The International Conference on Web Engineering) and a demonstration of the tool will be given during the conference. Keep reading to know more or download the preprint version of the paper here. You can also see the video of the presentation:

Several tools leverage OpenAPI definitions to automate API development tasks such as generating Software Development Kits (SDKs) for a number of frameworks and languages (e.g., APIMatic and Swagger Codegen) or generating documentation (e.g., Swagger UI and RedDoc). We are especially interested in this latter group as, in our opinion, understanding how to properly use a new API is a very error-prone and time-consuming task. Unfortunately, current doc tools do not help much here as they focus on generating simple descriptions of individual API components. Developers cannot ask more advanced questions or have any kind of more interactive exploration to find the info they are looking for.

Meanwhile, chatbots applications are increasingly adopted in various domains such as e-commerce or customer services as a direct communication channel between companies and end-users. We believe chatbots could also help in the API domain by assisting developers in their API discovery process. Initial experiments in this field have targeted so far Java APIs [4]  and Stack Overflow answers [1]. [5] is more similar to our initiative as it derives a bot from an OpenAPI specification but its focus is to facilitate the execution of the API, not to help developers understand the potential of the API itself.

In this paper we present OpenAPI Bot, a chatbot that leverages the OpenAPI specification to help developers understand REST APIs. OpenAPI Bot provides a quick way to get information about the metadata, operations, and data structures of an API, as well as advanced insights which are not directly grasped from the API specification.

OpenAPI Bot is built with Xatkit [2], a flexible multi-platform (chat)bot development framework. Xatkit comprises three Domain-Specific Languages (DSLs) allowing the definition of different components of a chatbot, namely: Intent DSL, which defines the user inputs through training sentences, and context parameter extraction rules; Execution DSL, which defines how the bot should respond to the matched intents; and Platform DSL, that details the available operations and actions available to the bot (e.g., sending a message, querying a database, etc) depending on the platforms the bot interacts with. Platforms are provided by Xatkit itself. These languages are complemented by an execution engine that takes care of the deployment of the bots by registering the defined intents to a given NLP engine (DialogFlow in our case), and manages their execution.

Figure 1 shows a snippet of the OpenAPI Bot definition2. The bot defines a set of intents representing typical questions and navigation queries related to an OpenAPI definition. Figure 1.a shows the intent GetOperationByName, which includes training sentences to get an API operation using its name. The intent creates the Operation context containing the operationName parameter which is extracted from the user input. Our bot uses two Xatkit platforms: the ReactPlatform, a platform that receives user inputs and sends messages through a web-based component, and the OpenAPIPlatform, a custom platform we created to manipulate OpenAPI definitions. The OpenAPI Bot’s execution model binds the specified intents to the platform’s actions. Figure 1.b shows a snippet of the execution model containing the rule to execute when the intent GetOperationByName is matched. This rule first invokes the GetOperationByName action from the OpenAPIPlatform, then checks the returned value to display either the requested operation or an error message if it does not exist.

OpenAPI Bot is up and running at https://som-research.uoc.edu/tools/openapi-bot/. The bot is initially minimized. Clicking on the button (bottom-right side) opens a chat widget. To begin with, the bot asks the user to provide the URL of the OpenAPI definition she wants to learn about. After this, the user can start asking questions about the imported API. Figure 3 shows three interaction examples related to the Petstore API3. The first screenshot illustrates a simple question to know the details of the operation getPetById. Similar questions could be asked for the other parts of the API (e.g., the schema definitions, the metadata information, etc). The second and third screenshots illustrate two advanced questions to find which operations return instances of Pet, and which ones use the properties of the schema Pet, respectively. Getting this information by directly reading the OpenAPI definition is not trivial. Indeed, the OpenAPI Bot relies on a set of heuristics we implemented in the OpenAPI SDK to discover some advanced insights about OpenAPI definitions which are not obvious at first glance. See additional examples in the website.

In this paper, we presented OpenAPI Bot, a chatbot that leverages the OpenAPI specification (currently, the bot understands OpenAPIv2) to help developers understand REST APIs by asking questions on the API using Natural Language. Besides simple questions, OpenAPI Bot is able to provide some useful information which is not easy to infer from a more lengthy read at the specification. We are working on improving OpenAPI Bot by continuously monitoring how developers use it (e.g. to see what questions they are interested in that the bot is so far unable to answer). Also, we plan to support OpenAPI version 3 and explore how to use the bot as a new end-user interface to also execute calls on the API itself.

My name is Hamza Ed-Douibi. I am a postdoctoral fellow working in the SOM Research Lab at  the Internet Interdisciplinary Institute (IN3) of the Open University of Catalonia (UOC) in Barcelona.