The main topic of the talk was the level of adoption of modeling in the industry. In his opinion, modeling and model-driven engineering will be commonplace in three years time (with the caveat that, as he said, he has been giving the same answer since 1985!).

It seems that we are now crossing the chasm in the technology adoption lifecycle. This is the most difficult step since it requires to transition from the “visionaries” (early adopters) to the pragmatists (early majority).

Stephen is confident we can make it to the other side because after
a “peak of inflated expectations” and, its result, the “trough of disillusionment” (where UML/modeling become unfashionable due to failed expectations) we are now progressing through the “Slope of enlightment” in the technology hype cycle , where software engineers start to understand how to best use modeling and its potential benefits . 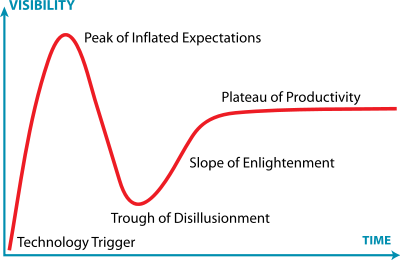 However, he pointed out several hurdles that still impede our progress, mainly related to our lack of ability to prove to practitioners that modeling could work for them and improve their productivity. His solution (not surprising for those who know his background) is the use of Executable Models (in short, a subset of the UML with formal action semantics that allows models to be executable and translatable directly into code by means of UML model compilers) but this is material for another entry since Action Semantics is now making a comeback.

I hope this time the “three years time” prediction becomes a reality!