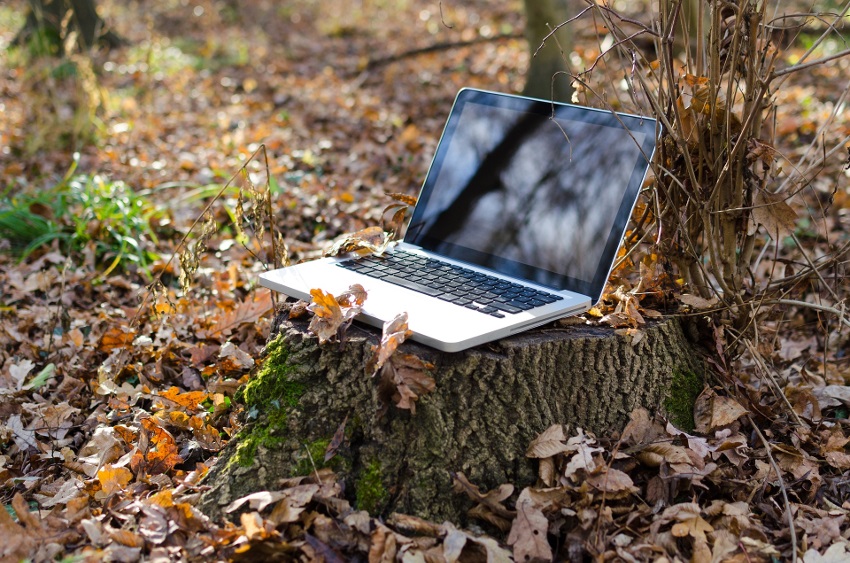 A word about energy consumption

With the increased popularity of smart-phones, tablets and laptop, and the rise of environmental concerns in our society, energy efficiency has become a critical point when developing applications. Either for battery-saving purposes, lowering the electricity bill of data-centers, or simply for the sake of having a green computation unit, reducing the energy consumption is more than ever a major consideration when writing a program.

Usually, those concerns tend to be addressed at the hardware levels, and several strategies have been proposed, developed and added in our computers, smartphones or data-centers, such as Dynamic Voltage Frequency Scaling, PowerNap, or Clock-Gating [LSH10, MGW09, KAN11]. However, energy consumption is highly application dependent: even a very energy-efficient architecture can over-consume if the program executed on it is written in an energy-oblivious way.

Hence for developing energy-efficient applications, the implication of developers is necessary. Indeed, the right design choices have to be made, especially since software-level energy management approaches have proven themselves to be effective for lowering energy consumption [MPC14]. Nonetheless, some other studies show that most developers only have little to no knowledge about energy-efficiency: common misconceptions are often made, solutions used are not always efficient, and a general lack of energy-management tooling has to be deplored [PCL14,PHAH16].

We believe giving developers insights about the energy consumption of their programs would help in understanding how they behave and could be a valuable asset for writing greener software. This article presents our approach for generating a model of the energy consumption of programs. First, a model is built from source code using reverse engineering. Then energy measurements are gathered at runtime and injected in this source-code model. This model can finally be used as a basis for improving energy awareness during the software development life-cycle. This article is based on an existing paper, presented in MeGSuS’18. The source code of the framework used is available on Github.

Reverse Engineering aims at creating high-level representations of existing systems from software artifacts, in order to be understandable for humans [CDPC11]. In the realm of Model-Driven Engineering (MDE), this representation is a model, conforming to a meta-model describing its syntax and semantics.

Here, we propose a Model-Driven approach for representing the source code of a program along with its energy consumption. We use the MoDisco reverse engineering framework to generate a model out of a Java program [BCDM14]. A dynamic analysis is performed in order to gather energy measurements from the Java program execution. Those measurements are then modeled using the standard Structured Metrics Metamodel (SMM) and associated with the MoDisco model. This model can then be used as a basis for analyzing the energy consumption of a program, locating and understanding the energy-consuming parts of the code, and optimizing it with model-driven techniques.

Let us consider a running example for describing our process, the following source code is going to be used for that:

First of all, we need to generate a model from this source code. Using the model-driven reverse engineering Framework MoDisco on this program generates a model representing all the aspects of the source code: packages, classes, methods, statements, expressions, and so on. This static model provides a high-level view of our system, and can be used in a standalone way for program understanding, transformation or refactoring using dedicated tools. An excerpt of this model is shown below:

Whereas the MoDisco model is generated statically, collecting energy metrics requires the execution of the program. The standard behavior of this program does not allow energy measurements, thus it has to be instrumented beforehand, in order to add energy-measuring probes inside it.

For that purpose, we modify the JVM byte-code of that program at runtime, using the ASM library. Probes are added at the entry point and exit points of each method. The entry probe computes the energy consumption before executing the method, and the exit one computes the energy consumption after executing the method. Comparing the two values gives a rough estimation of the method’s energy consumption. Furthermore, we trace each method call. This allows us to reproduce a call graph of the program execution, used later in the approach. The following byte-code presents an example of such instrumentation. On the left side, the byte-code is generated from the main method presented earlier, and is not instrumented. On the right side the byte-code is instrumented: the red statements have been injected.

Step 3 – Annotating the model via the Structured Metrics Meta-model

Once gathered, those measurements can be persisted in a model conforming to SMM. All the metrics gathered during execution are contained in an Observation element. Each energy measurement is modeled in a Measurement element, with the “value” attribute corresponding to the value measured. This Measurement element is linked to the corresponding MoDisco MethodDeclaration using the Measurand relationship: hence associating MoDisco and SMM. Furthermore, an ordered relationship is created between the Measurements, using the call graph information gathered at runtime. This relationship is used to retrace the execution of the program. In fact, a single method can be called several times during the execution of another method. This relationship is mandatory to understand the dynamic behavior of the program and its energy consumption. An excerpt of this model is available below. 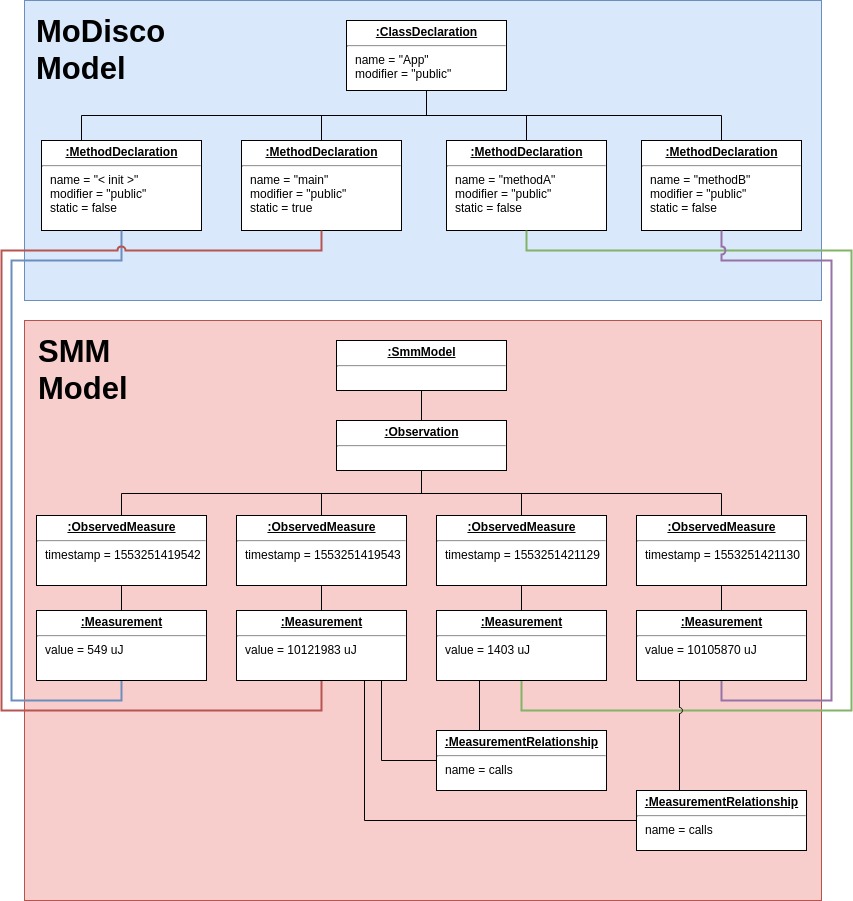 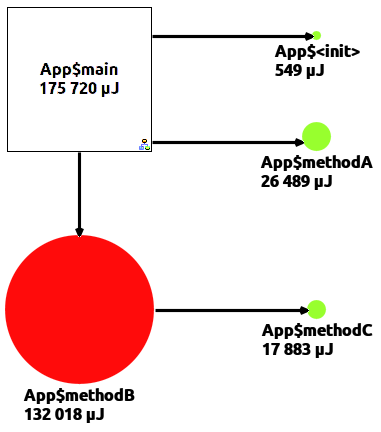 We can see that in App$main, App$methodB is the most energy consuming method call, whereas on its own, the App$main body consumed only 9% of the overall energy consumption.

Writing graphical representations of our model is fairly easy using Model-Driven tools such as Sirius or similar tools for building graphical editors. In fact, those tools are based upon modeling standards, that have been used in our approach. Besides proposing a graphical representation of a program, we believe our model can be used for energy optimization, especially through refactoring. As stated by G. Pinto et. al., energy-focused refactoring approaches are lacking [PSNC15]. MoDisco has proven itself to be efficient for modernizing and improving programs using model transformations.

This article presented our work for leveraging Model-Driven Engineering for energy-aware computing. We gather energy measurements at runtime, persist them in a model conforming to the SMM standard, and associate it with a model of the source code generated by MoDisco. We finally use this model to give developers feedbacks of their program energy consumption, through Graphical User Interfaces, hence helping them locating energy consuming methods.

We believe this model can be used for optimizing the energy consumption of programs through refactoring, though no experimentations have been performed on that yet.

[LSH10] Etienne Le Sueur and Gernot Heiser. Dynamic voltage and frequencyscaling: The laws of diminishing returns. In Proceedings of the 2010 international conference on Power aware computing and systems, pages 1–8, 2010.

[PSNC15] Gustavo Pinto, Francisco Soares-Neto, and Fernando Castor. Refactoring for energy efficiency: a reflection on the state of the art. In Proceedings of the Fourth International Workshop on Green and Sustainable Software, pages 29–35. IEEE Press, 2015.