Let me tell you a story:

In the beginning there where humans.

Some of these humans, where engineers. Logic dictates that they had to create models and share those models with other engineers… and eventually with the world!

So a bunch of engineers got together and thought:
> What if we persists the models in this cool XML based format which we can then send around, and at the other end the models can be recreated?

Shortly after, another group of engineers were starting to validate and transform models, or use them to generate code and what not. Activities known as model management. These group of engineers usually grouped elements by type in order to analyse or transform the models. or were only interested in the model demographics (total number of elements, number of elements per type, etc.). As such, these engineers were more interested in the internal characteristics of the models than the format used to share them.

Unfortunately, the needs of the two groups don’t align. The XML based format forces models to be loaded as a whole prior to processing. The modelling engineers were interested in parts of the model.

So that is how JSOI came to be, to provide a format that is model management friendly!

I’ve been working in Model-Driven Engineering for over 10 years. But it was not until I started working on incremental language execution that I personally felt the pain of working with large models stored in XMI format (probably the most common format for storing EMF models) – but that is a story for another time. Suffice to say that it got me thinking about how we persist models.

The Object Management Group (OMG) was looking for a model exchange format for the Unified Modelling Languages back in 1997. At that time, the XML was well-established and its tree-based serialisation format was found to be a good fit for the model exchange format. In 1998 the XML Metadata Interchange (XMI) Specification (version 2.5.1 as of writing this post) was born. The XMI specification defines how models (graphs) can be represented as trees, and then how these trees can be persisted in text files using the XML.

Model management languages came late to the party, else, in my opinion, the modelling language community would have sent a proposal to the OMG back in 1997; one that was designed with model management tasks in mind additionally to the exchange requirements. 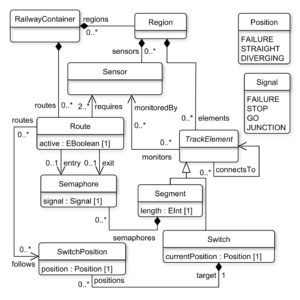 The Railway Metamodel (from the Train Benchmark)

JSOI is a Interchange Format for Efficient Model Management. Before getting into the technical details behind the language, let’s get hands-on. Using the Railway Benchmark metamodel in the figure above, a conformant JSOI model will look like this:

The two main differences between JSOI and XMI, is that JSOI does not use nesting to represent containment references (graph vs tree format) and that elements are stored in arrays grouped by type (model management vs exchange). The purpose of the elements-by-type structure is to facilitate retrieval of elements of a given type and the gathering of model statistics. For this, the elements-by-type structure not only holds all elements of the type, but also stores information about the type’s subtypes and the number of elements. The number of elements information is stored so model statistics can be retrieved directly from the model without having to load any elements.[1]

JSOI was designed with three goals in mind:

As my introductory tale told, model management tasks are often targeting only in a subset of the elements in a model and in particular in elements of a given type (or types). For example, a validation script might only be interested in validating Semaphores, a transformation script might only be interested in transforming Segments, and so on. With the XMI format, the complete model has to be loaded and then filtered to find elements of the desired type (usually done by the famous `<type>.all()`). With JSOI retrieving elements of a specific type can be delegated to the model instead, which can rapidly find them and load them. Even better, the loading of the elements will not happen until they are requested. This saves loading time of, for example, a second rule – with another type – which is invoked conditionally.

Face it, sometimes we only want to know the model demographics: how many of each type. The demographics can result in the model being skipped (i.e. not interesting enough) or trigger different scripts depending on the distribution/presence of elements. Please refer to the paper[1] that introduced JSOI if you want further details.

I know, I know, I am not the first one to propose alternatives to XMI. NeoEMF persists EMF models in a DB, so does Teneo-Hybernate, CDO, EMFStore, and others. However, JSOI is different in that it uses a textual based format. And what the heck, new programming languages are created frequently, why can’t we create new persistence/format languages too?

After an initial prototype for a proof of concept – storing EMF models in JSOI format, development has continued to also support loading and all the features of EMF’s Resource so that existing tools can use models persisted in JSOI format. You can follow the development here.

Note: Implementing a full-fledged EMF Resource turned out to be a bit harder than anticipated and life also happened, so development has been slow :).

Let me know in the comments below any questions or comments about JSOI, or drop by Kinori Tech to discuss your modelling projects.