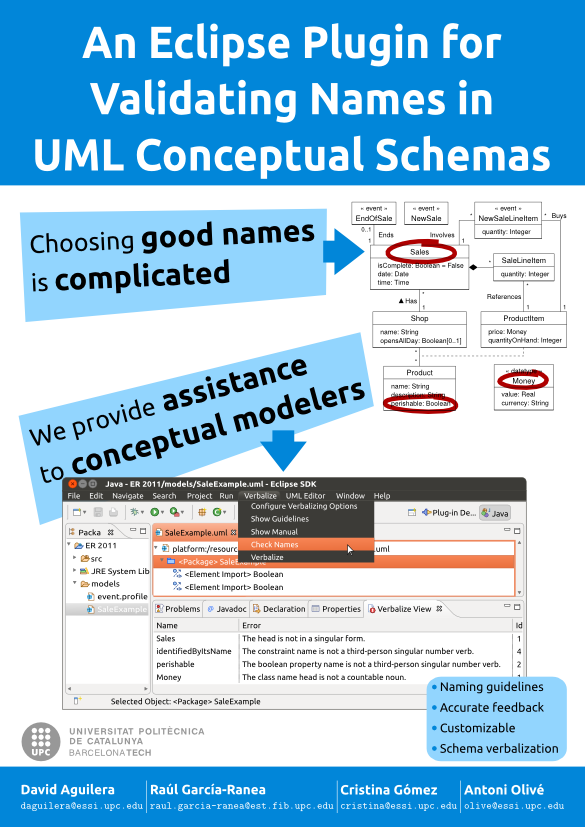 Because picking names is not only hard when it comes to babies….

On 2011, Raúl García-Ranea implemented an Eclipse plugin to validate the names of a conceptual model as his final carreer project [ESP], at BarcelonaTech (UPC), Spain. This work was presented as a Demo entitled An Eclipse Plugin for Validating Names in UML Conceptual Schemas in the ER Workshops 2011. Its main goal is to provide some assistance to conceptual modelers when choosing the names for their conceptual schemas. Therefore, the plugin implements a naming guideline proposal and automatically verifies that the names included in the conceptual schema satisfy this naming guideline. Below, you can see a couple of screenshots. 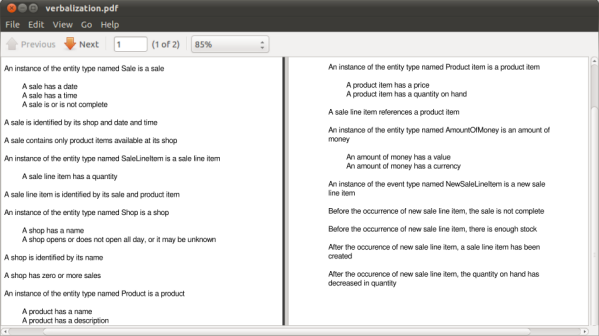 We conceived our tool as an Eclipse plugin that extends the UML2Tools framework by adding two main functionalities:

By selecting the Package and then clicking on the menu Verbalize > Check Names, our tool checks the whole conceptual schema looking for errors. If the modeler selected a few elements instead of the package, only those elements are checked instead of the whole schema. If one or more names are incorrect, the errors are shown in a new Eclipse view. We made the feedback as meaningful as possible, so the modeler can easily detect why a name is incorrect.

The second functionality introduces schema verbalization. Our tool generates a PDF file containing the pattern sentences defined in the naming guidelines and the names of the selected elements. Then, the modeler or a domain expert may check the document and detect whether the generated sentences are grammatically well-formed and semantically meaningful.