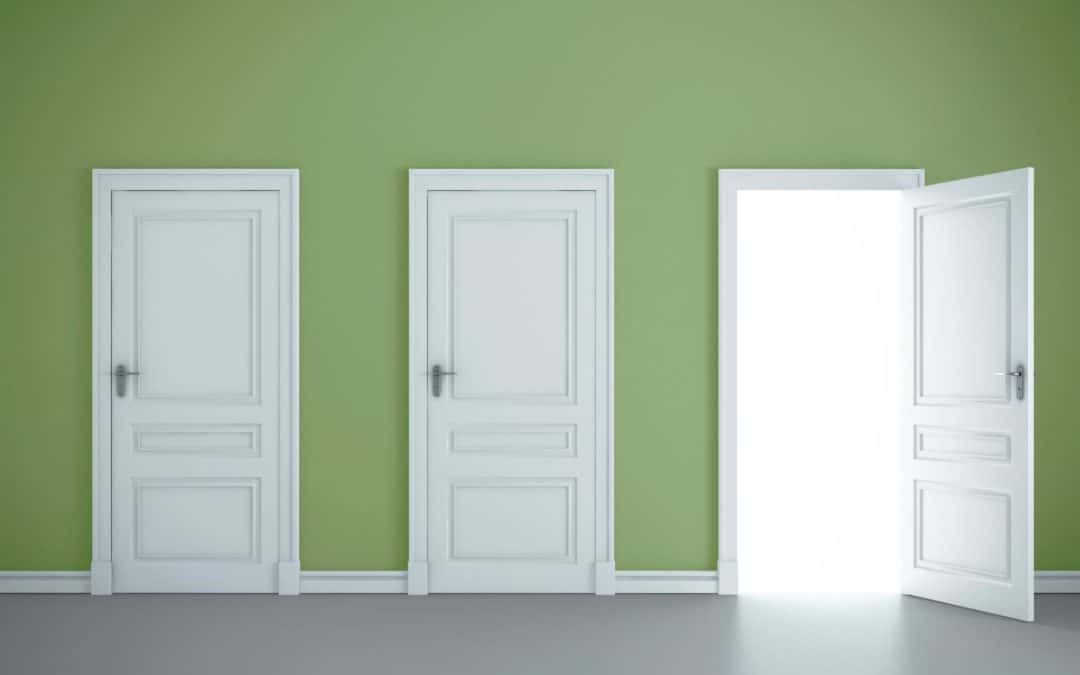 Nowadays, user interfaces that allow fluid and natural communication between humans and machines are gaining popularity. Many of these interfaces, commonly referred to as Conversational User Interfaces (CUIs), are becoming complex software artifacts themselves, for instance, through AI-enhanced software components that enable the adoption of Natural Language Processing (NLP) features.

CUIs are being increasingly adopted in various domains such as e-commerce, customer service, eHealth or to support internal enterprise processes, among others. Many of these scenarios are susceptible to arise security risks of both the user and the system. For instance, we may need to add security when we need:

Several works (see some examples) emphasize the importance of considering security, and especially access-control as highlighted in the above scenarios. However, we don’t have concrete solutions proposing how to add access-control as part of the definition of a chatbot or, in general, any conversational interface.

Our work, to be presented at EMMSAD’22, proposes to enrich CUI definitions with access-control primitives to enable the definition of more secure CUIs. Our solution is based on the use of model-driven techniques to raise the abstraction level at which the CUIs (and the access-control extensions) are defined. This facilitates the generation of such secure CUIs on top of different development platforms. In particular, we extend our generic CUI language with new access-control modeling primitives adapted to the CUI domain and show how this extended models can be enforced as part of a policy evaluation component.

Conversational User Interfaces (CUIs) aim to emulate a conversation with a real human. The most relevant examples of CUIs are the chatbots and voicebots. A bot wraps a CUI as a key component but complements it with a behavior specification that defines how the bot should react to a given user request. The conversation capabilities of a bot are usually designed as a set of intents, where each intent represents a possible user’s goal. The bot awaits for its CUI front-end to match the user’s input text (called utterance) with one of the intents the bot implements. The matching phase may rely on external Intent Recognition Providers (e.g. DialogFlow, Amazon Lex, Watson Assistant). When there is a match, the bot back-end executes the required behaviour, optionally calling external services; and finally, the bot produces a response that it is returned to the user. For non-trivial bots, the behaviour is modeled using a kind of state-machine expressing the valid interaction flows between the users and the bot.

On the other hand, access-control is a mechanism aimed at assuring that the resources within a given software system are available only to authorized parties, thus granting Confidentiality and Integrity properties on resources. Basically, access-control consists of assigning subjects (e.g., system users) the permission to perform actions (e.g., read, write, connect) on resources(e.g., files, services). Access-control policies are a pervasive mechanism in current information systems, and may be specified according to many models and languages, such as Mandatory Access-Control (MAC), Discretionary Access-Control (DAC), Attribute-Based Access-Control and Role-based Access-Control (RBAC). In this work, we focus on RBAC, where permissions are not directly assigned to users (which would be time-consuming and error-prone in large systems with many users), but granted to roles. Then, users are assigned to one or more roles, thus acquiring the respective permissions. To ease the administration of RBAC security policies, roles may be organized in hierarchies where permissions are inherited and possibly added to the more specific roles.

Figure 1 summarizes our framework to integrate access-control on CUIs, consisting of two components:

The authorization policy is expressed via a policy language. To this end, in this paper we propose to extend a generic CUI language with new modeling primitives adding access-control semantics to CUIs. As any DSL, this extended access-control-CUI DSL is defined through two main components: (i) an abstract syntax (metamodel) which specifies the language concepts and their relationships, and (ii) a concrete syntax which provides a specific (textual or graphical) representation to specify models conforming to the abstract syntax.

Figure 2 depicts our proposal for the language metamodel, combining all the RBAC basic concepts with CUIs specific elements. 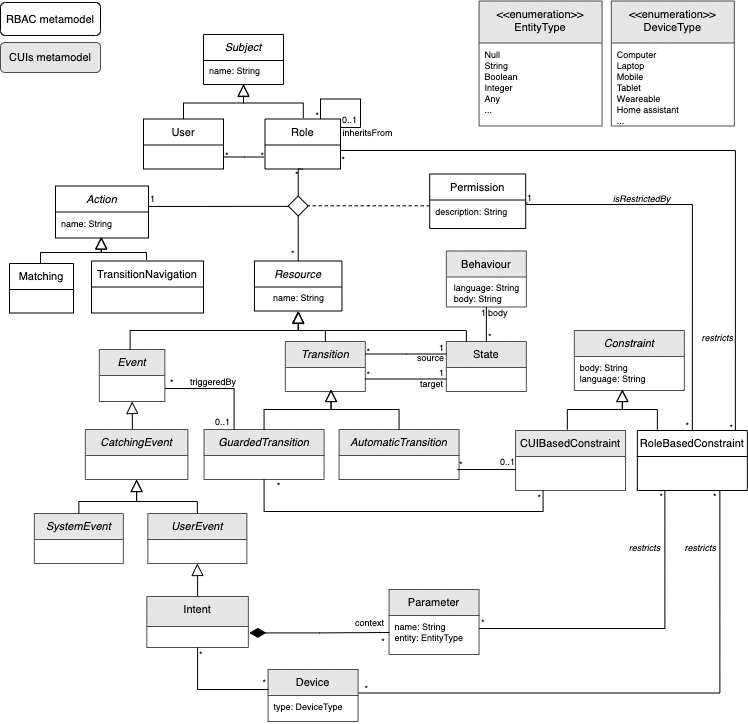 In the following, we detail the main concepts of the above metamodel.

The CUI-specific metamodel (coloured in grey in the above figure is a simplified version from the metamodel previously defined by the authors and describes the set of concepts used for modeling the intent definitions of a bot and its execution logic. The main elements of this metamodel are:

The RBAC metamodel is an extended version of the RBAC standard to adapt it to CUIs. This is done through the definition of a set of permissions which specify which roles are allowed to perform a specific action (a match to an intent or a transition navigation to a state) on a resource (intent, transition, or state). Its main elements are:

Given an RBAC policy, our framework needs to combine a number of runtime components to enforce it. The recommendation in the implementation of modern policy frameworks is separating the infrastructure logic from the application logic by using a reference monitor architecture. This architecture consists in two basic components: a Policy Enforcement Point (PEP) and a Policy Decision Point (PDP). Every access action requested by an user is intercepted by the PEP that, in turn, forwards it to the PDP to yield an access decision.

Our framework follows this architecture: access requests to the bot resources (intents, transitions and states) are intercepted. These requests are then forwarded to the PDP, which reads the policy rules to resolve the access. The access decision yielded by the PDP is returned to the bot through the PEP.

In this work we propose a new model-driven framework for enhancing the security of CUIs by integrating and adapting the semantics of the Role Based Access-Control (RBAC) protocol to Conversational User Interfaces (CUIs). In particular, we have extended a generic CUI metamodel with RBAC primitives that enable the definition of fine-grained access control policies for all key CUI elements (such as intents, states and transitions). As can be seen in the complete paper (to be published, check the pre-print version pre-print version), we also provide a preliminary proof of concept to demonstrate the feasibility of our approach implemented on top of the Xatkit open source chatbot platform.

As further work we plan to enrich the framework with other access-control models and improve the validation and tool support of the approach. Moreover, we see this work is a first step towards the modeling of other security-related aspects for CUIs, such as DDoS, privacy, encryption, and so on.