Are Cloudfier applications models or programs?

So, are Cloudfier applications models or programs?

Long story short: both. But read on for the scoop.

One very interesting side effect of that is that when you limit yourself to communicating intent, you naturally end up leaning towards technology independence. So as a consequence of being designed for communicating intent, executable models are also programs that are technology independent, and hence they are future proof. When what is considered the best technology for building software keeps changing every six months or so, that is a big win.

The architecture can be evolved in a cost-effective way. At the same rate, ever tried to upgrade the architecture of an application of any decent size? Sometimes, even moving to the latest version of a framework is so hard (or at labor intensive) that it is usually not done, and the application goes slowly but surely down the slope of obsolescence. With executable models, since the technological choices are not encoded in the application “source code” but elsewhere (the code generator or the model interpreter), you can evolve the architecture of the application without having to revisit how you addressed the problem domain requirements. You can do small adjustments to the architecture as you go very easily, but you can even completely change the target programming language (or support an additional one). 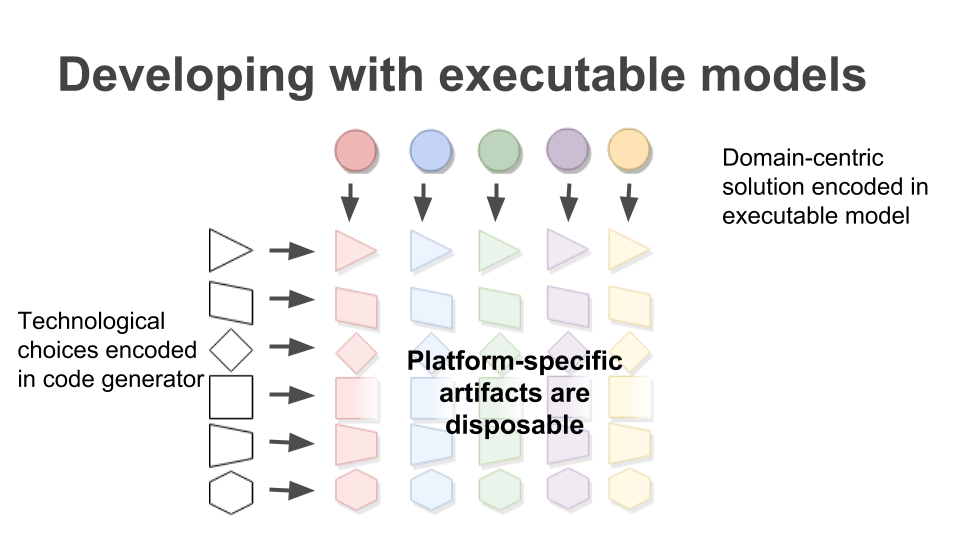 Developing using executable models in general (and hence in Cloudfier) opens up some very interesting opportunities:

I will cover these scenarios and how they are supported in Cloudfier in future posts. But if you have any questions about them now, just use the comment area below.

Founder at Abstratt Technologies, where he builds Eclipse-based tools (such as Cloudfier and the TextUML Toolkit) for model-driven development based on executable models, and consults on MDD, application modernization and software architecture. Rafael has BS/MSc degrees in Computer Science at UFSC (Brazil), and has developed software professionally for more than 15 years, in Brazil and in Canada, where he was once a committer in the Eclipse Platform Core team at the IBM/OTI Ottawa Lab.