Model transformations are an essential element of Model-Driven Engineering (MDE) since they allow developers to automate the manipulation of models. The reliability of any MDE process depends on the correctness of its transformations, since a bug in a single transformation may permeate to many projects.

In the last years, the engines of many transformation tools like ATL and Epsilon have matured enough to be used for real projects. However, these tools do not include methods to help in detecting errors and verifying the correctness of the transformations.

Moreover, IDEs for model transformation languages are still rudimentary compared to IDEs of languages like Java o C, since they lack facilities to detect problems as the transformation is developed, quick fixes, navigation shortcuts, etc.

AnATLyzer fills this gap for ATL by providing a static analyzer able to detect a wide range of non-trivial errors in ATL transformations as well as an advanced IDE which extends the basic ATL editor.

An update site to install the Eclipse plug-ins and instructions to install and use AnATLyzer are available at https://anatlyzer.github.io/.

IDEs for model transformation languages are still rudimentary compared to IDEs of languages like Java o C. AnATLyzer is here to fix this! Click To Tweet

Developing any moderately complex model transformation can be a difficult task, because it is not straightforward to grasp the accepted input model configurations, the relations between its rules, and the connections between the objects produced and consumed by the rules. This issue is exacerbated in ATL due to its implicit rule resolution mechanism. In this setting, AnATLyzer is intended to help in the early detection of problems and to help users to understand and fix them. 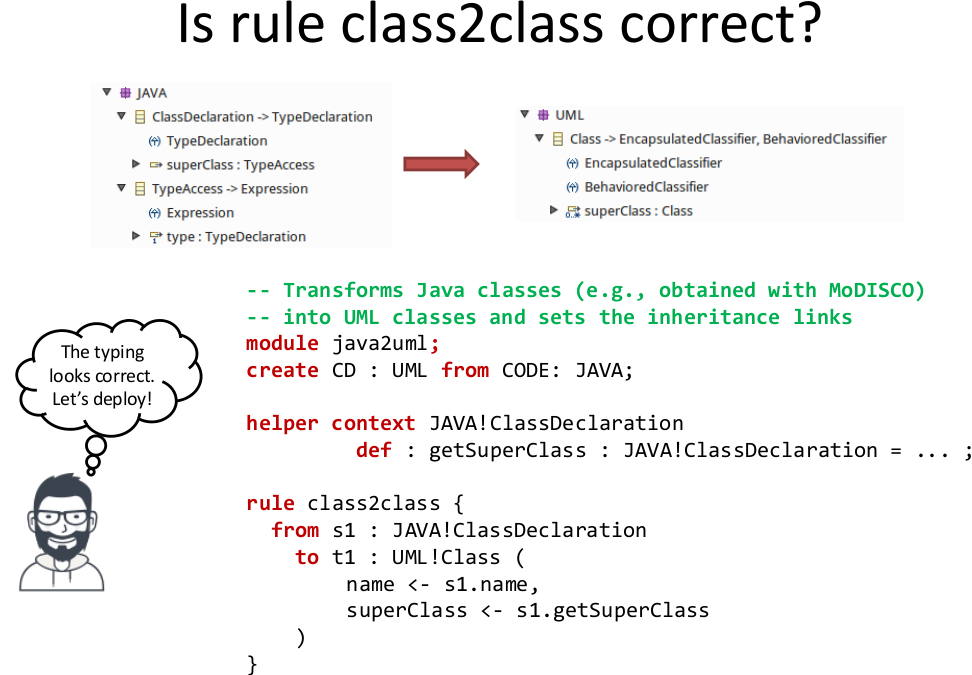 In fact, there is a problem in rule class2class because superClass is a derived feature in UML, and therefore cannot be assigned. Transformation languages like ATL and ETL do not check anything statically, not even simple problems like this one. However, this is a common error that developers make in transformations generating UML models, but could easily be detected with proper tooling.

The main feature of AnATLyzer is its static analyzer. It is able to detect more than 50 kinds of problems in ATL transformations. These problems are of various kinds, including typing problems, rule problems, target conformance violations, and style issues. The static analyzer is based on three components:

The following image shows the process followed by AnATLyzer to check errors.

Given an ATL transformation, the first step is type checking. The type inference engine annotates each node of the abstract syntax tree with its inferred type. From this, a transformation dependence graph (TDG) is constructed, which is similar to a program dependence graph but also including links between bindings and their resolving rules. Then, the transformation analysis phase outputs two kinds of problems: 1) actual errors and warnings, which can be readily reported to the user and 2) “potential problems”. These are smells which cannot be statically confirmed to be problems (e.g., there are OCL expressions like rule filters or if conditions which cannot be checked with a plain static analysis). AnATLyzer is able to verify them by relying on a constraint solver. For each potential problem, we compute its OCL path condition (i.e., an OCL constraint stating the requirements for an input model to make the transformation fail at the problems’ location). Then, this OCL constraint is used as input of the constraint solver. If a model satisfying the OCL constraint is found, the problem is confirmed and reported to the user since there exists at least one model that would cause the problem at runtime. Otherwise, the problem is discarded.

For example, the following is a piece of transformation between UML Activity Diagrams and Intalio BPMN diagrams. It contains some errors which will be detected by AnATLyzer.

On top of the type information gathered during the static analsis, AnATLyzer provides a number of facilities to improve the productivity of transformation developers. The image below is a screenshot of AnATLyzer showing the aspect of the IDE and some of its features. Let’s describe some of them. 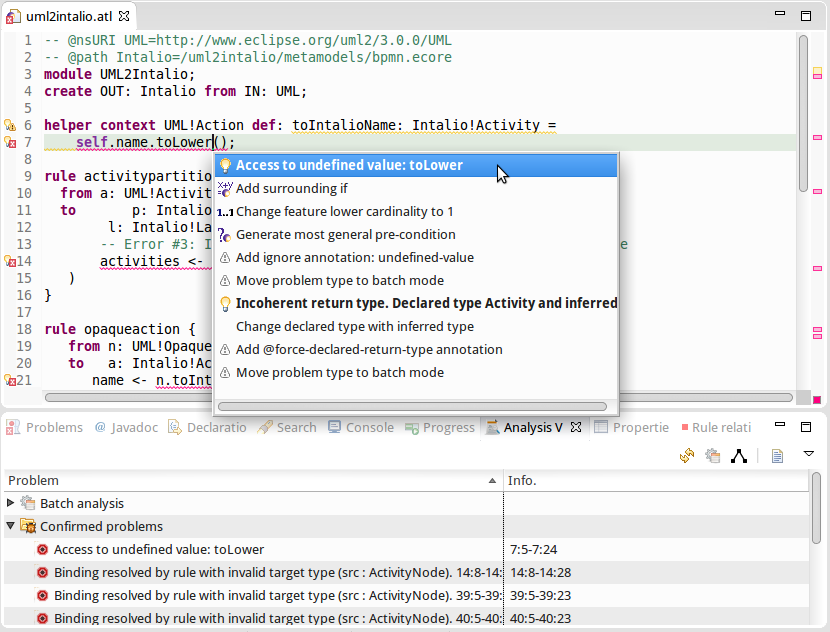 The static analyzer is automatically executed each time the file is saved. The regular type checking phase is normally fast enough to avoid interrupting the developer workflow. For those problems which need the constraint solver, a separate thread is launched in the background. It is possible to configure which errors should be checked in the live analysis and which kind of errors should be delayed to be checked on demand.

Some kinds of analysis may take more than a few milliseconds to complete as they heavily rely on the solver. These analysis include checking rule conflicts (i.e., no two rules match the same source element), target invariant analysis (i.e., checks whether any possible output model of a transformation will fulfil a set of provided post-conditions or target meta-model invariants) and child stealing analysis (i.e., checks that no object changes its container at runtime).

AnATLyzer provides a large catalog of more than 100 quick fixes to help developers easily correct the problems detected by AnATLyzer. A quick fix may modify the transformation text, modify the source or target meta-models or generate a pre-condition. In addition, the quick fix menu provides access to other features of the IDE, such as visualizations to investigate a problem. Given a problem, the user can access the available quick fixes with CTRL+1.

AnATLyzer provides a visualization facility to improve the understanding of the relationships between bindings and rules.

The visualization renders the transformation as a graph where rules are nodes and bindings are edges. This visualization is also used to help the user understand binding-related errors. The following image shows the visualization for “Error #3: Binding resolved with invalid target”, indicating that the guilty rule is objectnode, so that it is easy to see that the target element, Artifact, is not compatible with the type expected in the left hand side of the binding, Activity.

Editors for other languages like Java provide facilities to easily jump between the elements of a program. For ATL, the keyboard shortcut CTRL+O shows a popup dialog to quickly access the elements of the transformation (helpers and rules). The shortcut CTRL+B pressed over a binding allows a developer to jump to the rules which resolve a binding, and if it is pressed over the rule name shows the bindings which are resolved by such rule.

It is possible to make use of the AnATLyzer infrastructure to profit from the type inference, the transformation dependence graph and the possibility of using the constraint solver to refine the analysis or using algorithms already implemented like computing the meta-model footprint of a transformation. This is useful in a number of scenarios, for example: