Cloud computing has become the primary model of pay-per-use to obtain cloud services in a short time. Companies are using cloud services to get access to computing resources located in a virtualized environment. However, the traditional method of using a single cloud provider has numerous limitations regarding privacy, security, performance, and geography reach. Furthermore, companies are focusing their efforts on avoiding dependency on a single vendor for products and services.

As a result, companies start to use multiple clouds and look for methods to move or migrate their infrastructure from a cloud provider to another one. In previous work, we have presented ARGON, which is an infrastructure modelling tool for cloud provisioning. In this paper, we propose an extension of ARGON to provide a model-driven migration approach among cloud providers.

This work was presented at SISTEDES – JCIS 2018. You can download our paper entitled A Model-driven Migration Approach among Cloud Providers to learn more about our approach or continue reading for an introduction. This research work was written by Julio Sandobalín, Emilio Insfrán, and Silvia Abrahão.

Cloud Computing [1] are hardware-based services offering computing, networking and storage capacity where: hardware management is highly abstracted, and infrastructure capacity is highly elastic. To leverage cloud capacities concerning Infrastructure as a Service (IaaS) both the industry and the academia are focusing their efforts on automating the cloud infrastructure provisioning.

Infrastructure as Code [2] is an approach to infrastructure automation based on software development practices. Additionally, DevOps [3] (Development & Operations) is a movement that is encouraging continuous collaboration between developers and operation staff through a set of principles, practices, and tools to optimize the software delivery time.

On the other hand, every team or department of a company has their requirements in terms of privacy, performance, or geography reach. Similarly, each cloud provider offers a different type of infrastructure and services to support enterprise requirements. Moreover, lack of portability among cloud providers and vendor-lock-in are issues that should be avoided. For these reasons, companies are starting to use multiple clouds (i.e., multi-cloud) to satisfy their needs to reach flexibility and agility required by the market. However, migrating the infrastructure among cloud providers is still proven to be a challenge both to the industry and the academia.

In recent years, there has been much interest in look for approaches or strategies to support the migration process among different cloud providers. Following, we describe the principal research works related to this topic.

Holmes [5] proposes overcome limitations of forward-engineering and consider existing infrastructure services a model-based round-trip engineering approach to offer a method which will be evolved accordingly. Holmes incorporates runtime reflection for applying differential changes to an existing service topology. Comparing two models, such as a target model with a current de facto runtime model. The research is utilized to facilitate alignment and migration of infrastructure services between cloud deployments.

Nodehi et al. [6] propose a conceptual model for inter-cloud Interoperability, enabling dynamic schedule operation for Infrastructure as a Service (IaaS) between different clouds. The research work provides a better understanding of elaborates on the cloud computing architecture, appropriate metrics for Service Level Agreements (SLA) and Quality of Service (QoS) models that are required for seamless integration and interoperability between cloud environments. Then, a conceptual model for the inter-cloud Interoperability Framework for Workload Migration is proposed. The component of the framework provides interoperability the Transformation Engine, which maps workload between heterogeneous cloud providers, while Model Driven Architecture (MDA) is adopted as an applicable method for developing the Transformation Engine module.

Beslic et al. [7] present an approach to deal with the issue of software migrations between Cloud Platforms. The goal is to provide assistance and tooling to re-engineer a software using the Model-Driven Architecture and Refactoring approach. It is divided into several stages. First, the discovery of a cloud software deployed on a platform using MoDisco [8]. Next, the transformation of the program structure using Model transformations on the discovered model is done. Then, fine-grained transformations are defined between an API and its counterpart on the targeted platform using a general-purpose transformation language such as TXL. Finally, the migration on the targeted platform with offline and online tests suites validation to be sure that the software runs as usual.

Miranda et al. [9] present an approach based on software adaptation and Model-Driven Engineering (MDE) techniques, which describes a lightweight alternative for designing and building loosely coupled cloud applications composed of components that are grouped and distributed amongst different cloud providers. Due to the heterogeneity of the services and interfaces provided by such providers, elements have to be adapted appropriately to each provider taking into account the technical differences or mismatches that exist in each case. Miranda et al. analyse and measure the benefits of applying adaptation techniques to avoid the vendor lock-in effect. First, they explain the impact of the vendor lock-in effect on the effort required to develop cloud-based applications. Next, the effort required for migrating the service dependent on parts of the application is measured. Finally, they describe an adaptation proposal and explain how it can be applied to significantly attenuate the negative aspects of the vendor lock-in effect in the construction.

The research works mentioned above focus their efforts on analyze models obtained from cloud services such as infrastructure and cloud-based applications. In contrast, our proposal takes advantages of model-driven engineering to automatically generate artefacts to support the infrastructure migration process among cloud providers. 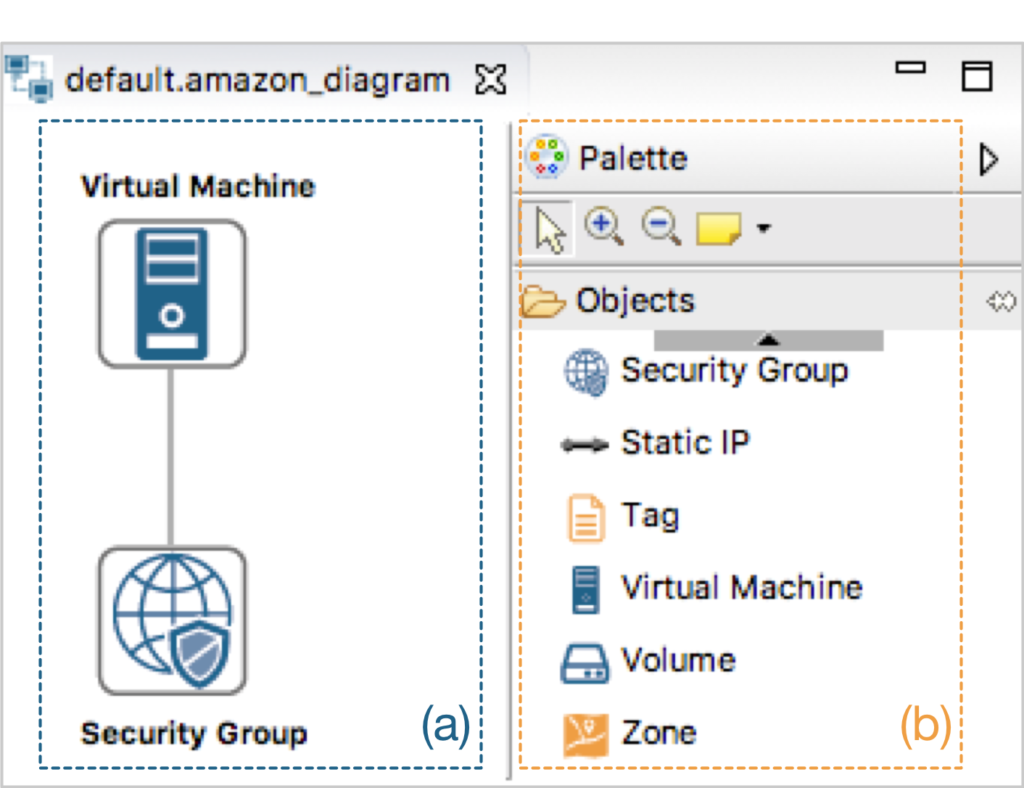 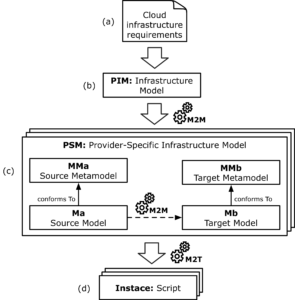 To demonstrate the feasibility of our approach we have modelled a virtual machine as a cloud provider-independent infrastructure model (see Fig. 4), which will be transformed into a cloud provider-specific infrastructure model (i.e., Amazon model). In the PSM layer (see Fig. 3c), we have obtained the Amazon model, which will be migrated toward an Azure model. The Amazon model is conforming to Amazon Web Services metamodel. Fig. 5a shows an excerpt of the Amazon Web Services metamodel. The Azure model is conforming to Microsoft Azure metamodel. Fig. 5b shows an excerpt of the Microsoft Azure metamodel.

Fig. 4. Infrastructure model of a virtual machine modelled by ARGON

Fig. 4 shows a cloud provider-independent infrastructure model of a virtual machine modelled by ARGON. In this case, by using M2M transformations, the infrastructure model is specified as an Amazon model (PIM to PSM, see Fig. 3). The infrastructure model has a webserver connected to a security-group, which performs like a firewall. The security-group has an outbound rule (all), which enables all outgoing connections of the webserver. Additionally, the security-group has two inbound rules, which enable the ingoing connections to the HTTP protocol and Remote Desktop Connection (RDC) for a Windows Server. The webserver has connected an external-disk and an elastic-ip. The webserver (see Fig. 4) has settings corresponding to a virtual machine from Amazon Web Services, however, to add features for a virtual machine from Azure platform (such as publisher, offer, and SKU) is necessary to use an azure-profile element.

Fig. 5. Model-driven migration of a virtual machine from Amazon model to Azure model.

Fig. 5 shows the model-driven migration approach based on M2M transformations to migrate a virtual machine from Amazon Web Services to Microsoft Azure. Following are explained changes:

Fig. 6. Matching of elements between the Amazon model and the Azure model.

Finally, according to ARGON’s architecture (i.e., Model-driven engineering, see Fig. 3), the Azure model is the input of the Acceleo tool, which generates the corresponding scripts for a particular DevOps provisioning tool. In this case, the provisioning tool selected (e.g., Terraform tool) uses a script to orchestrate the infrastructure provisioning in Microsoft Azure. Fig. 7 shows the infrastructure elements deployed in Microsoft Azure.

As a future work, we plan to run experiments with students and practitioners with experience in cloud computing development and in particular with knowledge of provisioning resources in the cloud. Experiments will help us to validate the effectiveness of the proposed solution concerning the migration process among different cloud providers, such as Google Computing Engine, Rackspace, etc.

Assistant Professor at Escuela Politécnica Nacional in Quito (Ecuador). PhD candidate in the ISSI research group at Universitat Politècnica de València in Valencia (Spain). My research focuses on the continuous delivery of cloud resources based on Model-Driven Engineering, Cloud Computing and DevOps.